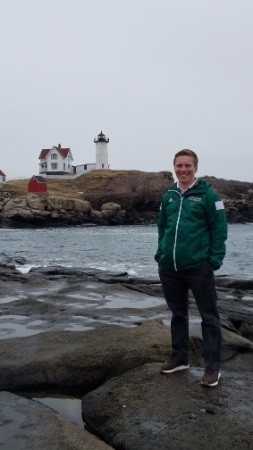 Castleton alumni Eric Horsfield has Spartan pride in every sense of the word.

The Tolland, Connecticut native earned a Bachelor of Science in Sport Management in 2015 and served as an athletic administrative graduate assistant for two years, earning a Master of Science in Athletic Leadership in 2017. In August of 2017, Horsfield was appointed assistant director of NCAA compliance at his alma mater.

“If I had never chosen to come to Castleton, I almost certainly would not have gotten my master's degree and I definitely would not be in the position that I am in today,” he said. “The connections that I made at Castleton have directly led to me being in my current position.”

As a student at Castleton, Horsfield took an active role throughout the athletics department. He interned alongside the athletic director. As a four-year member of the university’s lacrosse team, he was named to the North Atlantic Conference all-academic team.

“When I came on my visit, I just had a feeling that this was the place for me. I really liked the vacation pattern as well as the new athletic facilities,” he said. “I decided to stay for my graduate work because of the financial package that is offered to the graduate assistants. I knew that I would be involved heavily in athletics and I would learn a lot about my field.”

Horsfield thanks many of his mentors throughout his time as a student on campus for putting him on the track to work alongside them in his post-graduate career, including Associate Dean for Athletics and Recreation Deanna Tyson and Men’s Lacrosse Head Coach Bo McDougall for teaching him “how to work through adversity and that every person has a job on a team, and the only way for a team to work is for each member to embrace that job.”

It should come as no surprise that Horsfield’s favorite memory of his time as a student at Castleton involves sport.

“My strongest memory of Castleton is after winning the NAC championship during my sophomore year,” he said. “We had one of the largest crowds ever for a non-football game and when we won, the fans stormed the field then as we were walking back to the locker room, people were yelling and congratulating us from the balcony of the dorms. I will never forget the excitement and sense of community that I felt that night.”