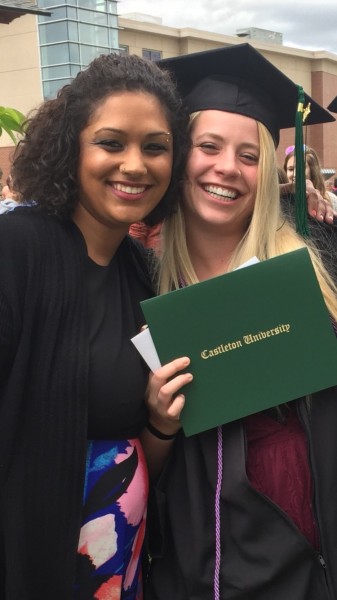 Castleton Alumna Karsen Woods praises the University for driving her accomplishments and confidence to succeed.

“Castleton has been the driving force behind my accomplishments, my confidence, and my resilience,” she said. “Castleton was big enough to empower me beyond my wildest dreams and small enough for me to have a part in empowering Castleton.”

Castleton’s natural beauty helped Woods, who graduated from the University in 2017 with a degree in Media and Communication, feel at home. She especially liked visiting Lake Bomoseen on hot days, and skiing when the mountains just received a fresh frosting of powder.

“I skied, I hiked, I leaf-peeped, I was snowed in, I went to Lake Bomo (the best lake ever) when it was hot,” she said. “Vermont is home to me. Castleton was just a piece of home I never got to explore; now I will never have to be without it.”

Behind Woods’ passion and energy to make a change in the world were her Communication professors.

“These are my people. They supported me as professors, mentors, and friends,” Woods said. “They provided me with tools, encouraged me to ask questions, allowed me to challenge them, and challenged me in return.”

Woods learned change is possible, starting on campus. She was the President and founder of the Planned Parenthood Generation Action club. Her voice inspired many others to become involved.

She encourages all Castleton students to stand up for what they believe in and never stop fighting for it.

"Speak up. If something happens on campus, in the community, or in the world that you don’t think is right … say something,” she said.