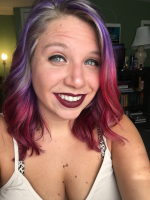 Walsh graduated in 2012 with a Bachelor of Science in communication. Now living just outside of New York City in Northern New Jersey, she works as an associate producer in the unscripted television world. She’s worked on many shows that broadcast on networks, including TLC and Food Network.

“Through the Communication department, I learned that a career in entertainment was ultimately what I wanted to pursue. Through writing news stories, editing video, and working in front of and behind the camera in Video Workshop taught me that I wanted to work in TV,” she said.

During her senior year, Walsh was able to produce the short film, “Haven’t You” in her video magazine class, which she credits for leading her to where she is today. She also recognizes the role her professors played in her time on campus. From the faculty, she met as a three-year Student Orientation leader to everyone in the Communication department.

“Robert Wuagneux and I became very close friends during my four years at Castleton. Whether he was teaching me in class, supporting me on the sidelines at my Rugby game, or just lending me an ear, he was always there for me,” she said. “Bob Gershon, Roy Vestrich, and David Blow were also very influential to my college career. I took classes with them for almost all four years.”

This individualized attention from faculty and staff and small class sizes were one of the things that Walsh loved about Castleton and what made the University unique.

“Castleton was just so small and personable. You could have a professor one year that would remember you three years later when you took another course with them,” she said.

Walsh takes her love for Castleton with her everywhere she goes — including the Big Apple.

“I'm super proud to be a Castleton Alumni. To me, it means that I come from a community of caring, fun-loving individuals,” she said. “I'm always talking about Castleton, in hopes that someone in the big city I'm in knows where I've come from.”