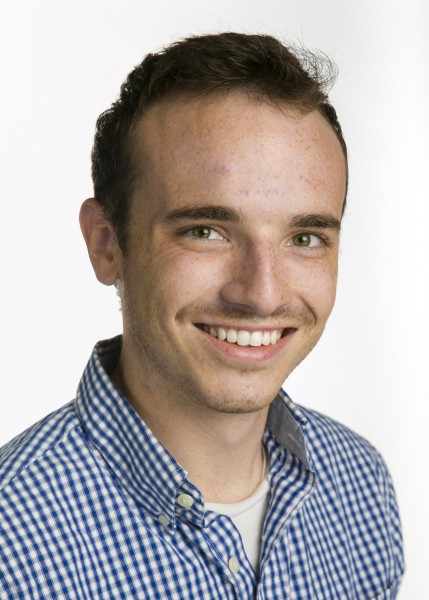 After hauling out his room in Haskell Hall to its original white-wall state and loading down his Jeep with computers and college apparel, Peter Marcano joined the rest of the Class of 2013 for the first commencement ceremony beneath the pavilion. With a Bachelor of Science in Computer Information Systems, the fresh Castleton alumnus and New Jersey native turned left onto South Street and put the green mountains in his rearview mirror.

The following fall, Marcano acquainted himself with another green and touched down in the Emerald Isle at the University College Cork where he received his Masters of Business Studies in Business Information Systems.

“It’s an entirely new experience and every day I feel like a fish out of water, but that is exactly how I want to live,” said Marcano of his move to Ireland.

At the conclusion of his yearlong graduate program, Marcano took a leap of faith on an opportunity that would keep him in Ireland for at least an additional year.

“I applied and pitched my idea and my prototype to a start-up incubator,” he said. “It’s an organization that provides funding, support, mentorship, and office space for start-ups to build and grow at an accelerated rate.”

Marcano said the goal of his company is to eliminate the need for all usernames and passwords on the Internet.

In his four years at Castleton, he was able to acquire and refine the skills necessary to take on this challenge.

“Being able to attend a small liberal arts university like Castleton allowed me to get a feel for where my strengths and weaknesses were as a student,” Marcano said.

Originally a Communication major with aspirations of becoming a graphic designer, he soon realized that his interests were in the ways modern technology works.

As a first-year student, Marcano said he had some trepidations about the process of changing his major but that in a short afternoon he very easily made the switch to a computer information systems major.

“At Castleton faculty and staff knew me by name and took time out of their day to point me in the right direction,” he said. “It was completely stress-free and really illustrated how much support Castleton offers its students from the start.”

Throughout his college experience, Marcano said he benefited from both academic and professional opportunities that expanded his knowledge in his field.

“In a fast-moving industry like business or technology, Castleton managed to provide a solid foundation for my career,” he said. “In the classroom, each day was challenging, interesting and most importantly, rewarding.”

As a result of his academic successes, Marcano was hired as a student worker by Castleton’s Information Technology Services Department.

“The pairing of this with my major allowed me to make connections between the work I was doing and the subjects I was learning,” he said.

Additionally, he spent three years working in Residence Life as both a community advisor and senior community advisor where he worked to extend the sense of community into Castleton’s residence halls. Marcano said that each year he enjoyed creating a cooperative social and academic environment and the opportunity to be a positive influence in the college experience of so many Castleton students.

“Being a Castleton graduate has left me with a single struggle: I can’t seem to get my resume to fit on a single page. I’ve had so many relevant experiences, influences, and opportunities,” said Marcano. “I grew at a college where ‘community’ was more than just a buzzword.”

Despite the miles between him and his alma mater, Marcano said he tries to stay current with Castleton through reading The Spartan online and keeping in touch with faculty and staff.