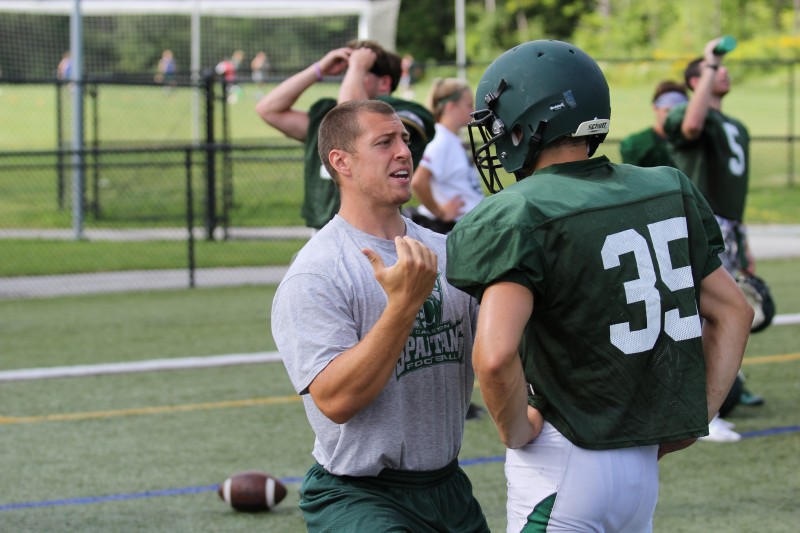 The final whistle may have blown on his athletic playing career, but Castleton alum and Physical Education Major Mike Perrone, '15, has done anything but step away from the game.

Perrone accepted a position as an elementary physical education teacher and was named varsity football, basketball, and baseball head coach in his hometown of Warrensburg, NY, in addition to already serving as the head varsity baseball coach at Vermont's Proctor High School.

"Castleton had a huge influence on me, it strengthened my love and passion for teaching and coaching," Perrone said.

Before these accomplishments and just a few months after crossing the stage to receive his bachelor's in physical education, Perrone found himself back in Spartan Stadium wearing Castleton green, minus the pads and helmet this time around.

While pursuing his masters in Athletic Leadership, Perrone returned to the field as an assistant coach alongside his former head coach, Tony Volpone.

"I learned how to conduct a first-class program both on and off the field. Coach Volpone is a great mentor and a coach I aspire to emulate," he said. "The coaching staff at Castleton were the first ones to contact me when I was announced as the head varsity football coach at Warrensburg."

As a student-athlete, Perrone played on the defensive outside line for the Spartans. He began his career with an ECFC Rookie of the Week honor and grew to start in all 10 games as a senior and added a 23-yard interception return for a touchdown in the squad's victory over Anna Maria. He also brought the Maple Sap Bucket home to Glenbrook Gymnasium after defeating the Norwich Cadets three times in his career, twice as a player and once as a coach.

The accolades and opportunities continued for Perrone.

In just his second season with Proctor High School Varsity Baseball, he led the Phantoms to clinch the Marble Valley League D Division title. After only two wins in his first season, Perrone brought the team to a 14-3 record that season and claimed the division championship to garner a number seed in the state playoffs, an achievement that also earned him Marble Valley League Coach of the Year.

Eventually, his success called him home.

"It has always been a dream to coach at Warrensburg, so I'm very excited and thankful to get this opportunity," he said.

In his first season as Head Football Coach for the Burgers, Perrone said he is excited not only to coach at his alma mater, but also to have his father standing on the sidelines as his assistant.

"He coached me when I was a high school football player and has always been a great role model and mentor. It's a tremendous opportunity getting to share this experience with him," Perrone said.

Between Proctor and Warrensburg, Perrone now coaches four teams over three seasons and two states. He said this leaves little downtime, but in the short off-seasons, he keeps busy with AAU and summer leagues, as well as working with his athletes in the weight room to prepare for their next season.

Looking ahead, Perrone said his goal for his career is to share his love and passion for athletics and fitness to both students and athletes.

"I hope to provide a great learning experience that creates lifelong memories," he said. "I strive to educate my athletes on the game to make them smarter and more well-rounded. Lastly, I hope they enjoy their time spent as student-athletes and that I can act as their guide and mentor."