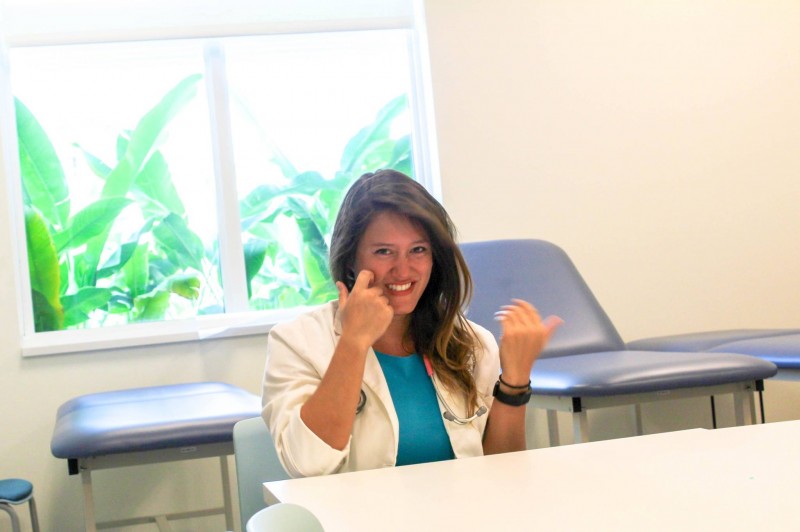 Alumna Crystal Golding has made big strides in the medical field since graduating with a Bachelor of Science from Castleton in 2013.

Golding is currently an introduction to clinical medicine (ICM) teaching/research fellow at her alma mater, American University of the Caribbean. There, she conducts breast cancer research on the Afro-Caribbean population of women on St. Maarten. She also teaches medical students and prepares them for their U.S.-based clinical rotations.

“Over the last couple of months, I’ve been bouncing back and forth to the U.S. completing residency physician interviews,” she said. “The goal is to match into a position in March, then begin as an intern in July.”

Golding says that Castleton had many influences on her education during her undergraduate studies.

“Its small class sizes and warm, knowledgeable faculty not only encouraged me to learn but to develop close-knit relationships with fellow students and professors,” she explains. “The bonds I formed with the faculty of the Natural Sciences Department had major influences on my career as a physician.”

She adds that she didn’t start her studies with a plan to be a doctor, but says that her mentors at Castleton noticed her passion for science and medicine before she did.

“With their direction and encouragement, I accomplished something I thought was unattainable, and graduated with an M.D. in August of 2018,” she notes.

“Although I eventually gravitated toward research with human subjects, she instilled a strong knowledge in procedure and data collection that I apply within every research project I am involved in,” she explains. “Our research involved the evolutionary history of Arabidopsis and sent us to remote locations in Ireland and Norway.”

When it comes to staying in touch, Golding says that Dr. Livia Vastag and she remain close friends.

“I first met her during her very intense Organic Chemistry course and decided to prolong the torture by signing up for Organic Chemistry II,” she said, adding that amidst the tedious work and frequently visited office hours, a friendship developed. To this day the two remain close and have dinner together whenever Golding visits Vermont.

Starting college at East Carolina University in Greenville, North Carolina, Golding believed that there, she was simply a number. She says that with a school that large, it becomes difficult for faculty to concentrate on the general well-being of an individual.

“You get lost among a sea of colleagues, all trying not to drown,” she says. “This feeling, combined with being so far away from my family in Vermont, influenced my decision to look for a school with small class size, close to family, and within the state, I knew and loved. Ultimately, I chose Castleton!”

Looking back, Golding says that the people she met within Castleton and the relationships she formed paved the way to medical school.

“Not only did Castleton provide me with a strong educational background, but with a strong sense of character as well,” she said. “For such a cold state, the people of Vermont are truly warm, and I believe that especially holds true within the Castleton community. I am proud to be among them.”