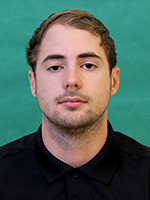 Student-athlete alumni Jordan Goodrich was welcomed to Castleton with open arms, feeling right at home from the second he stepped foot on campus. It was the friendly and accepting attitudes of not only his teammates, but also everyone on the University’s campus that drew him in both athletically and academically.

“When I arrived on campus for my football recruiting visit I felt like I was at home,” said Goodrich. “I knew that if I came here I would feel comfortable and have no issues transitioning into college life.”

Throughout his four years, Goodrich was able to explore many different options within the liberal arts field, which allowed him to become a more well-rounded individual. Initially, he had full intentions of becoming a social studies educator post-graduation, but after finishing his bachelors a year early, he decided strive toward getting a non-traditional license in special education.

Along the way Castleton’s faculty, coaching staff and his teammates were his number one support group, pushing him to be better in all aspects of life. He also gained valuable experiences beyond the classroom and athletic field.

“Being able to work with kids and teachers outside of campus is extremely valuable. Not only in the sense of gaining occupational experience, but making connections with individuals,” Goodrich said.