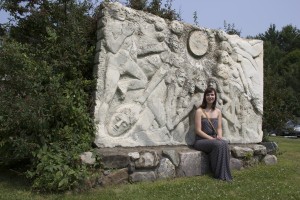 After beginning her college career feeling lost in a colossal lecture hall, Spanish education major, Kelsey Burnell, transferred to Castleton for its close-knit community. Originally from Poultney, VT the senior said her return to the Green Mountains to pursue her dreams of becoming a Spanish teacher was a better decision than even she could have anticipated.

“Castleton has offered me so many experiences to learn outside of a traditional classroom setting,” she said.

In affiliation with the study away offices, Burnell spent a semester in the American Southwest as well as an entire academic year in Spain, where she was able to immerse herself in Spanish language and culture.

“Languages are a beautiful art form and I fell in love with its creation, origin and opportunities that arise from the development and knowledge of a new language” she said.

Between camping in national parks and building adobe bricks for a family who lost their home in a fire during her semester spent in the Southwest, she had the opportunity to delve into her Vermont roots and experience a hands-on and nature based curriculum. Burnell attributes her close work with professors Paul Derby and Liza Meyers and their contagious energy for their profession in this semester to a positive change in her perspective on teaching.

In her time spent on campus, Burnell also served as the President of the Spanish Club in the fall of 2013 and is a member of Kappa Delta Pi and Sigma Delta Pi.

As she prepared for graduation at the end of the 2014 academic year she said she would hold her diploma with nothing but gratitude for the place that carved the person she has become.

“I grew and changed to become the confident and well-rounded individual who will walk across the stage come May,” Burnell said.