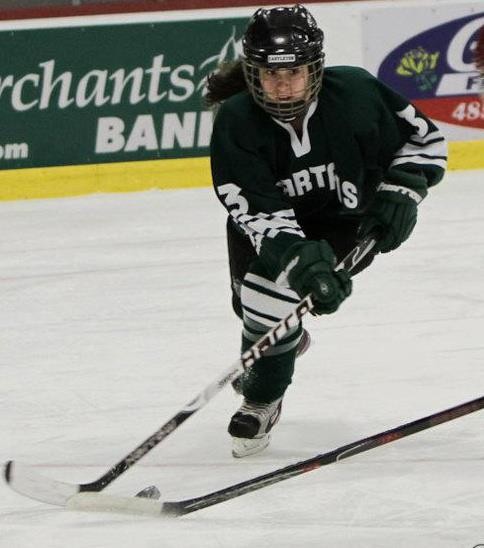 The 2015 graduate left Castleton with a Bachelor of Science in Sport Management and is currently employed as a retail operations specialist at Bauer Hockey, LLC. in Exeter, New Hampshire. Crawford has been promoted three times since starting at the company in September 2015.

Looking back at what brought her to Castleton, Crawford knew that the University was the right place for her before she even stepped foot on campus.

“I got this two-sided direct mail piece and immediately fell in love,” she said. “The campus atmosphere was apparent on that little 8x10" card, not to mention the school had both my major and my sport of choice. I knew I needed the individualized attention that the small classes would provide me.”

While at Castleton, Crawford took an active role on campus. As a member of the women’s ice hockey team, she worked closely with the team’s head coach to organize the annual Pink the Rink event, which benefits the Foley Cancer Center at Rutland Regional Medical Center and the hospital’s breast care program. She helped her team raise nearly $20,000 during the three years she oversaw the event. Crawford was also a member of Castleton’s rugby club.

She was also a student leader of the Castleton mentor program and served as secretary of the sport management and administration club. Being involved in the community on campus helped to set Crawford up for success upon graduation.

“Joining clubs, playing sports, and challenging myself to make new friends and have new experiences made my overall Castleton experience one to remember and has also provided me with confidence to do those same things in the real world,” she said.

That same community was there for Crawford when she needed it most. During the first week of her senior year, Crawford’s mother lost her battle with cancer.

“My professors and the academic dean were very understanding of this situation and I was able to miss two full weeks of school,” she said. “The two teams I played for at Castleton, Women’s Ice Hockey and Club Rugby, came together to host a bake sale and charity rugby game in honor of my mother; I had never felt more accepted and at peace then I did during that Sunday afternoon.”

When she looks back on her time at Castleton, Crawford still feels the same way about the University as she did when she opened the mail all those years ago.

“I will always be connected to that small college with a big heart and can always feel like my voice and my opinion matters,” she said.