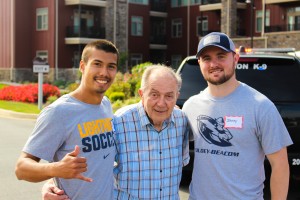 Walking across the stage beneath the pavilion at graduation will forever be rooted in Sports Administration alumni Jeremy Benoit’s memories of Castleton.

“When I graduated with my bachelor’s degree, President Wolk knew that I had signed on to be at Castleton for another two years while I worked for the athletic department and earned my master’s,” Benoit said. “When I met him in the middle of the stage, he hugged me and said, ‘I'm so happy to hear that you're staying with us for another two years.’ How many colleges have a President that knows the students that well, let alone a President who would wrap you in a hug and say that? Not very many, if any at all.”

Currently the assistant athletic director of Goldey-Beacom College in Delaware, the 2013 graduate attended Castleton for the opportunity to continue his football career, the small class sizes, the scenic campus, and its distance from his home in New Hampshire.

“It's everything I could have asked for; it's the total package,” he said. “Some schools have great campuses and student life, some have great professors and academics, some have prolific sports teams … Castleton has it all.”

Benoit remains in contact with his academic advisor Marybeth Lennox, whom he worked closely with as her teacher’s assistant during his senior year and while pursuing his master’s degree in Education as a graduate student at Castleton University.

“Her willingness to advance your networking and professionalism, coupled with her brutal honesty, has been pivotal to my success in the field of athletic administration.”

His advice to current students is to take advantage of as many extracurricular activities as possible and not to be afraid to engage with professors.

“At small schools, it's much easier to gain the interpersonal communication skills to match the education because you have more direct access to professors and staff,” he said. “But Castleton takes it a step further by having the best faculty and staff, all truly buying into the ‘small college with a big heart’ motto.”