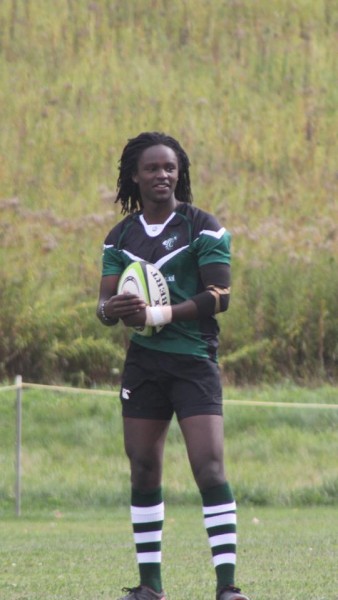 International student Kinyenje Ngigi has traveled over 7,000 miles from Nairobi, the capital of Kenya, to finally find comfort at Castleton, his home away from home.

“It’s been hard moving from a city in beautiful Nairobi to rural, forested, winter wonderland Vermont,” he said. “But I definitely have less distractions, which is good for my GPA.”

As a Sport Management major and Coaching minor, Ngigi has found Castleton to be the perfect match for all his interests. He was drawn to Castleton because of the strong athletic programs and is now involved in both the women’s and men’s rugby programs.

Having served as president and captain of the men’s club team and assistant coach to the women’s varsity team, Ngigi is appreciative to be a role model for other student athletes.

With his experience and knowledge of the game of rugby, Ngigi hopes to start his own club team after graduation. He will always remember the great times he had on the field and off the field with his rugby “family.”

The continuous support from his professors is another reason he feels at home at Castleton.

“Honestly they are 99 percent why I have stayed here,” Ngigi added.

He is happy he is able to embrace his passion for rugby and transpire it into a strong education that will help lead a success path for his future.