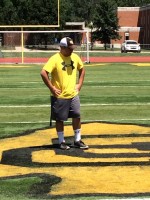 For Paytton Hobbs, Castleton was an opportunity to branch out while still being close enough to his home in Salisbury, Vermont, to get a home-cooked meal and do a few loads of laundry when necessary.

Despite his initial nerves about the college lifestyle, the linebacker said he fell into sync with the Spartan mentality the first day of football training camp, where he met teammates that would become friends for a lifetime. Soon after, Hobbs experienced immense support for the university that extends beyond the campus barriers.

“In my experiences through football at Castleton, we have been able to have such a strong community fan base and connection to the fans that is amazing,” he said.

As a sport management major, the required service hours allowed Hobbs to experience the variety of career paths the major has to offer before committing to an area of focus. Although he originally attended Castleton with the ambition of becoming an athletic director, his service hours experiences revealed to Hobbs that coaching was the right direction for him.

“I aspire to be a collegiate football coach,” he said. “By being in this degree, I have been able to learn not only the business side but also the morals and logistics to that career path.”

Hobbs credits his coaches Bo McDougall and Adam Chicoine with mentoring and preparing him for his intended career. Factors off the field have also played a significant role in Hobbs’ Castleton experience.

“Through being highly involved on campus, I have been able to build relationships with members of the Castleton Community at a wide range and develop bonds that will last a lifetime,” he said.

As he prepares to receive his diploma, Hobbs said his close-knit relationship with his advisor, Marybeth Lennox, has proved to be beneficial.

“She truly cares about the individuals she advises and does all she can to provide students with advice and help to get their foot into the door that follows Castleton,” Hobbs said.

As a member of Castleton’s Right to Play, he played over 40 hours of dodgeball, earning a place in the Guinness Book of World Records for the World’s Longest Dodgeball Tournament, and participated in a barefoot soccer tournament. These events raised thousands of dollars for sports equipment in impoverished countries.

In conjunction with the Castleton Alumni Office, Hobbs also created a movie, which emphasized the giving of a gift to Castleton. “This video was presented in front of the majority of the employees on campus and was very much enjoyed,” he said.

Both on and off the field, Hobbs created his own unique experiences at Castleton and took advantage of the opportunity to make both professional and personal connections.

“If I weren’t at Castleton, I would just be a number in a system, but here I am an active member of the community,” he said.