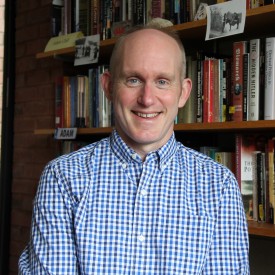 Adam Chill joined the Castleton faculty in 2009. He teaches European and world history and Global Studies and is the Coordinator of the Global Studies program.

Professor Chill is particularly interested in the connections between consumer choices and the production of goods in a global economy as well as the ways in which gender shapes our world. His courses help students make links between history, contemporary global issues, and their own lives.

Professor Chill earned his Ph.D. at Boston College, where he studied European history with an emphasis on Britain and Ireland. His research interest in gender and nationalism led him to the study of bare-knuckle boxing in eighteenth and nineteenth century Britain. In 2017, he published Bare-Knuckle Britons and Fighting Irish, which describes the ways in which boxers, journalists, and many others used identity to promote themselves and their sport. These strategies both reflected and shaped national, ethnic, religious, racial and gender identities in Britain and Ireland in the eighteenth and nineteenth centuries.