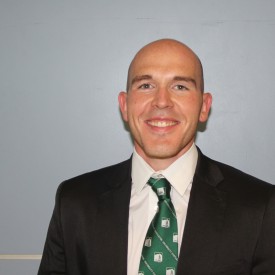 Casey McDonnell remains on the Castleton coaching staff as an assistant coach, working primarily with the offensive line.

The past two seasons, McDonnell was a graduate assistant with the Spartan program, overseeing the running backs. In 2017, Moe Harris set a program record by rushing for 1,180 yards as Castleton went 6-4 overall, including 5-2 within the ECFC.

Prior to Castleton, McDonnell spent the 2015 season as an intern with the University of New Hampshire, helping the Wildcats clinch the program’s 12th straight NCAA FCS playoff berth.

McDonnell spent the 2014 season with the Endicott Gulls as an assistant offensive line coach. In his lone season with Endicott, McDonnell helped the offense average 26.9 points and over 400 yards per game while two offensive linemen earned All-Conference recognition.

A graduate of Endicott College with a bachelor’s degree in English in 2014 and a master’s degree in business administration in 2015, McDonnell played on the offensive line for the Gulls from 2010 to 2014. During that time, the Gulls earned two New England Football Conference Championships and two ECAC North Bowl victories. McDonnell was also a two-time Academic All-Conference player and a Capital One CoSIDA Academic All-District team member in 2012.

McDonnell is a native of Plaistow, N.H., and a graduate of Timberlane Regional High School.