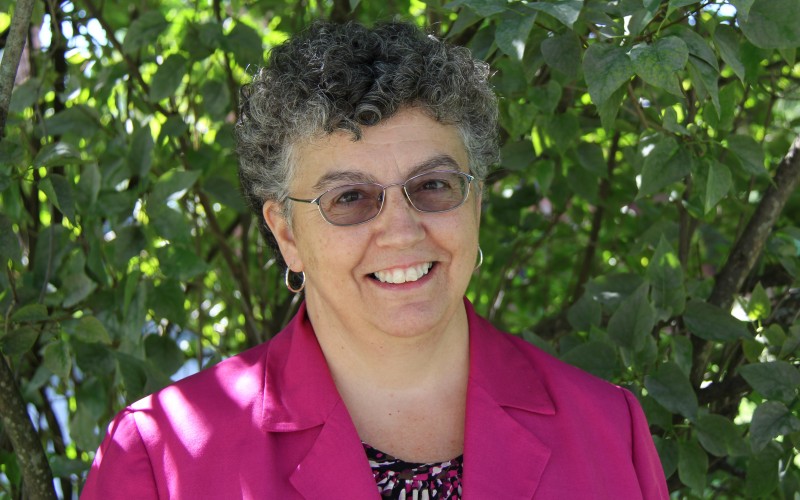 On a Friday afternoon in late October, Associate Dean of Students Victoria Angis will turn the lights off in her office, close the door, and at the same time, bring her more than 40-year career serving Castleton University and its students to a close. Angis – more affectionately known as VA to those around campus – will retire this fall after a long and distinguished career.

Angis completed most of her undergraduate coursework at University of New Hampshire. There, she found her passion for planning, particularly student activities.

“My sophomore year, this boy I liked said, ‘I’m going to a meeting in the MUB,’ which was what we called the student union, or the campus center. It was the Memorial Union Building. ‘Do you want to come?’" she said. "I said sure, like a puppy dog. I didn’t even know what the meeting was about.”

The meeting was to start a club that would coordinate big-name concerts on campus. Angis was the only woman at the meeting. Before long she was elected treasurer of the student group and eventually became the club’s president.

“I discovered that I wasn’t a great student, but I loved putting on events,” she said. “And I was good at it.”

Angis got a job in the student union as a building manager. She was the first woman to hold that post.

Angis eventually packed up and moved to the midwest to finish her degree. She was working in a student union in Minnesota when she got a call from her former advisor. He was at Fitchburg State University in a newly-opened student union and wanted Angis to come work with him.

She arrived at Fitchburg that July and took on the role of assistant director of operations, taking charge of getting the building’s operations running smoothly and systems in place.

“I liked that, but I kept getting involved with the Association of College Unions. On one of the committees I was on, I met the guy who was the director of activities at Castleton State College. He had all these stories about the people he worked with and the administration,” she said.

After four years at Fitchburg, Angis was wanting more.

“I thought, I want my own place where I can make decisions and put my stamp on it,” she said. “Low and behold, a job at Castleton showed up.”

A Place to Leave Her Mark 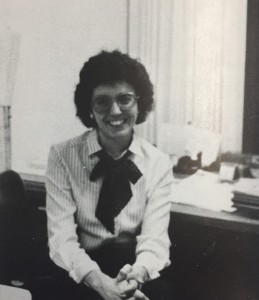 Angis first came to Castleton in 1980. She applied for a position as coordinator of student activities/director of the campus center. The night she arrived for her interview, she settled into the guest room in Haskell Hall, only to find that the room had no lights.

“But on the bed, with a pile of linen, was a pile of stuff to read: the catalog, admissions stuff, the handbook. Luckily the bathroom had a light in it, so I spent that evening and the next morning in the bathroom reading all this stuff,” she said. “I thought, ‘what type of a place have I walked into?’”

The next day, after a long interview process, Angis found herself in then-president Tom Meyer’s office.

“He looked at me and said, ‘If you want to work someplace that you can make a difference and you’ll never work harder in your life, this is the place for you.’ As soon as he said that, I said, ‘That’s exactly what I want.’”

Angis received a call from Meyer the next week offering her the job. She soon connected with Joe Mark, who had just accepted a job as Castleton’s dean of students.

“My apartment was tiny and I had a long phone cord. I can remember pacing around that whole apartment for probably 45 minutes talking to Joe,” she said. “We fed off each other. We were excited about how to build this department.”

Angis’ first day at Castleton is one that sticks out to her. She walked into the Student Government Office – where her office is now – and met two work-study students who were date stamping each piece of promotional mail and recording it in a notebook.

“I got settled in my office and said, ‘What are you doing?” They said, “Oh, we’re just recording the mail. I asked them why they were doing that and they kind of looked at me and said, “It’s the mail; that’s the way we’ve always done it.’ I said ‘Not anymore.’”

Angis’ core job included responsibility for the Campus Center, student activities, student government, and orientation. Not long after her arrival, Mark and Angis had their first introduction to Castleton’s orientation counselors.

“They had the belief that freshmen were meant to be demeaned and they were the social leaders on campus. We looked at each other and said this has got to change,” she said. 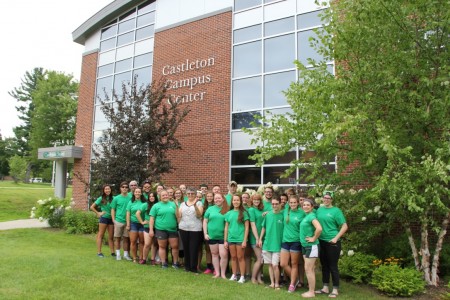 The next year, the group was renamed Student Orientation Staff (SOS). At the same time, Angis was working to change the perception of the group.

She continues to oversee SOS today.

Angis has worn many hats during her time at Castleton. Most of her responsibilities have built on her work with students. Some came to her because she felt strongly it had to be done. Others required a leader who was detail-oriented and could rally a group of people to collaborate for a common goal.

Her responsibilities, such as overseeing the Student Government Association, have changed over the years as the needs of Castleton and its students have grown.

At one point, before the University had a director of Human Resources, Angis served as Title IX coordinator.

“For years I met with every search committee and I liked that. That’s been interesting. I’ve learned a lot. And I think I’ve helped some people and I think I’ve become a better person because of that,” she said.

“Tom Meyer came to us and said, ‘I want you to figure out how to fill the seats in the FAC and create an experience that will bond the freshmen class,’” she said. “He was trying to build community. So that’s how we came up with Soundings.”

Angis provided administrative support for the program, keeping track of students’ grades and Soundings cards, none of which was digitized at the time. 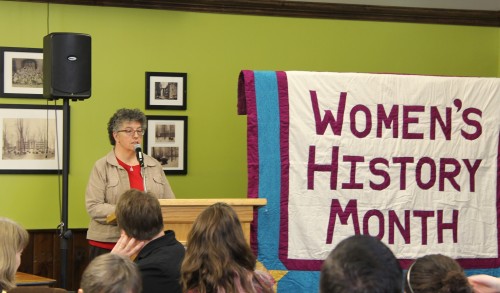 Women’s History Month is another long-standing committee Angis has been a part of. The celebration began in 1988 and there were just three events that year. In the 33 years since, she has helped support nearly 330 Women’s History Month events at Castleton, including the University’s hallmark Every Woman Has a Story event. To honor her last Women's History Month at Castleton, President Jonathan Spiro signed a proclamation naming March 1 Victoria Angis Day. 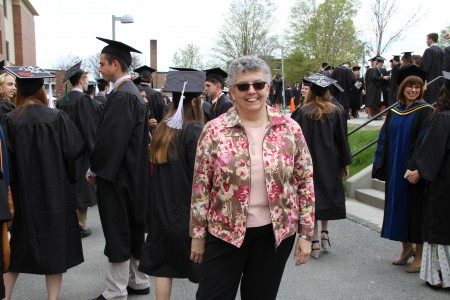 She also supports parents of students, among many other groups, and is responsible for overseeing the University’s largest event each year: Commencement.

Angis has also faced personal challenges during her time at Castleton. In 2014, she suffered a stroke while on campus. A testament to her dedication to her students, Angis was immediately concerned over who would teach her Community College of Vermont course that evening. She went through an extensive rehabilitation process, and the experience left a lasting impact on her.

“When I had my stroke, I think it taught me a lesson. It helped me slow down, and it helped me realize I was too hard on myself and too hard on other people,” she said.

Angis has remained an active member of the Association of College Unions International and served as Castleton’s institutional representative for Vermont Women in Higher Education for many years. She was awarded the organization’s Sister Elizabeth Candon Distinguished Service Award in 2012, which recognizes women who promote and work toward the advancement of women in higher education.

Home Away from Home

When you ask Angis to describe the Campus Center in one word, it’s home. 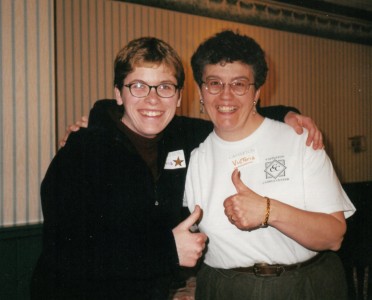 “When I first came here, I didn’t know anyone. I was very lonely, very shy. I spent far more hours in the Campus Center than I did in my apartment. And there are students who do that,” she said. “They find their place there. They find themselves there. I can empathize with that because that was me. Then life interfered and I met my husband and built a life outside of this place, but it’s home. My husband would probably say I still spend more time here than I do at home.”

When Angis came to Castleton, the Campus Center was five years old. The building, which was made of concrete blocks, was built quickly because there was no student center after a fire devastated Leavenworth Hall. When former president Dave Wolk announced the Castleton Student Initiative – a campaign that was meant to reinvigorate student life and included building a new Campus Center – Angis was looking forward to being part of the process. She kept waiting for an invitation to meetings with the architect and contractors, but it never came.

“This went on for months and finally, I knew when the dean was leaving and I knew where they were meeting so I went. And Dave was there and he just said, ‘oh, hey Victoria!’ So I just kept coming,” she said. “I was the only female. I got to have a pretty good relationship with the architect because he had renovated a lounge in a student union, but he had never built a student union. And I’ve never built a student union too, but I figured I’ve been in a lot more student unions than he had. So I was able to feed him information and they started to include me in decisions.”

Angis recalls walking into the newly renovated Campus Center when it first opened in 2009. “It was one of the pinnacles of my career,” she said.

Five years ago, Angis’ friends started to mention retirement. At the time, she couldn’t even bring herself to say the word. It took her three years to be comfortable thinking about retiring. Then COVID happened and like many employees, she began working from home.

“It was over that time period I was thinking you know, wouldn’t it be nice if we could have Christmas vacation with our kids and not have to be here, to go back to school for registration the week after.”

Angis retires on October 29 – four days after her 70th birthday.

“I’m getting used to the idea that after October 29 this won’t be my identity. That’s part of it. It’s been my home away from home for so long and is so much a part of my identity. My new mantra is a quote from E.M. Foster. We must be willing to let go of the life we had planned, so as to live the life that is waiting for us.”

Want to help us celebrate VA's dedication to Castleton and its students? Learn more about the Victoria Angis Legacy Campaign, including making a gift, leaving a video tribute, and attending our celebration event!