A Physical Education Alum’s Journey Brings Him Back to Castleton 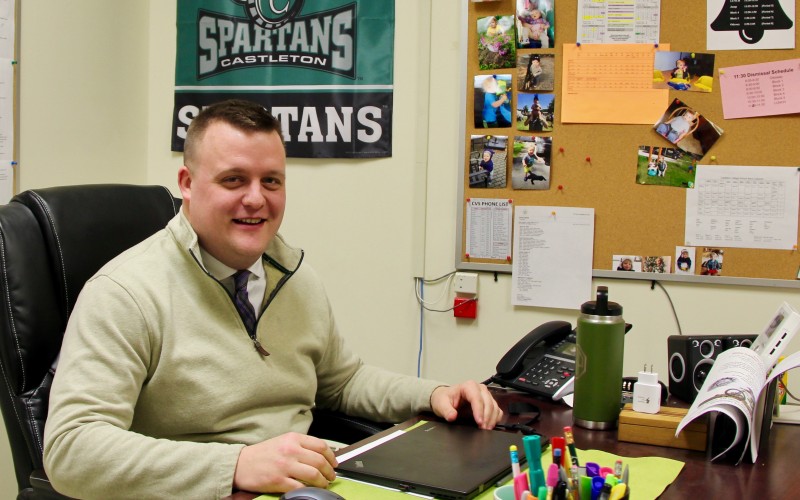 If you thought Phil Hall was going to go far after graduating from Castleton University, you got it dead wrong. He’s right across the street.

Phil parlayed his Physical Education degree and a master’s degree in educational leadership into a role as assistant principal at Castleton Village School just six years after graduating – a fast rise through the administrative ranks by any standard.

It’s a role that is suiting him well.

“I quite enjoy middle school. People think I'm nuts when I tell them what I do. I just had a big family shindig and people came up to me and said ‘are you really a middle school principal?’” Phil said. "I've got a really strong team of teachers and instructional assistants and that makes all the difference. I think Slate Valley is an exciting district to work for. There's a lot going on and the leadership team is really forward-thinking."

Phil’s not only excited about the school district, but also his return to Castleton.

“It's great to be in Castleton. I have such comfort with this town, so that's cool. I already knew a lot of people from around town so it's going well,” Phil said.

There were a few pitstops along the way on his return to Castleton.

After graduating in 2013, Phil found his first job in education in a support role at Rutland Intermediate School. Then, opportunity knocked and he was hired as a football coach and full-time science teacher at Mount St. Joseph Academy in Rutland.

“I thought, my God, I might never teach PE. I never thought there was a possible way I would be an assistant principal in my 20s. I didn't think there was any way into school leadership,” Phil said.

He was right about one thing. He never did teach physical education. What he did is go on to become dean of students and athletic director and eventually assistant principal at MSJ before leaving for his current position. It’s a role he has excelled in.

“I'm always needed by two people at once. It's never the same thing, which is probably my favorite thing about it. That's my answer for people who think I'm nuts for being in a middle school. I’m never bored,” Phil said.

Never being bored is something that comes with experiencing something different every day. The only constants on the job are doing the morning announcements and a student-centric focus.

“I'm in the classroom as much as I can be. I try to find as many opportunities as possible to spend time with the kids and be with the teachers,” Phil said. “We're a small school so it's a family environment among the staff. We do a lot of covering for each other, so that's a spot I find time to spend with the students.”

Phil says there are a number of ways that his Castleton education has helped him be successful in his career, but there are a couple that really stand out.

“Number one is learning how to present to a group of people. I credit Professor Pleban. She had us presenting to our peers all of the time. It was super helpful because I learned how to engage people,” Phil said. “I think you can have all of the strategies in the world for dealing with behavior. If you can't engage people, those strategies are going to fail.”

The other stems from one of Phil’s true loves – football. Phil feels being in a leadership role on the Castleton football team in its earliest years helped him develop his skills. When Phil transferred from Norwich University to Castleton after his freshman year, he was one of just two players on the roster with college experience.

“Having three years in a leadership role on a very young football team, I learned a lot about what works and what doesn’t, what leading by example really means,” Phil said. “I don’t think it’s typical to get that opportunity while still in college.”

Phil also has a little advice for those who wish to get into education administration.

“Be great at what you do first. If you're a teacher, be a great teacher first,” Phil said. “Hone your craft and be great at that and then don't forget those things when you become an administrator. You have to remain student-centered.”