Action!: Veronica Stevens '23 Excels on Stage and in the Classroom 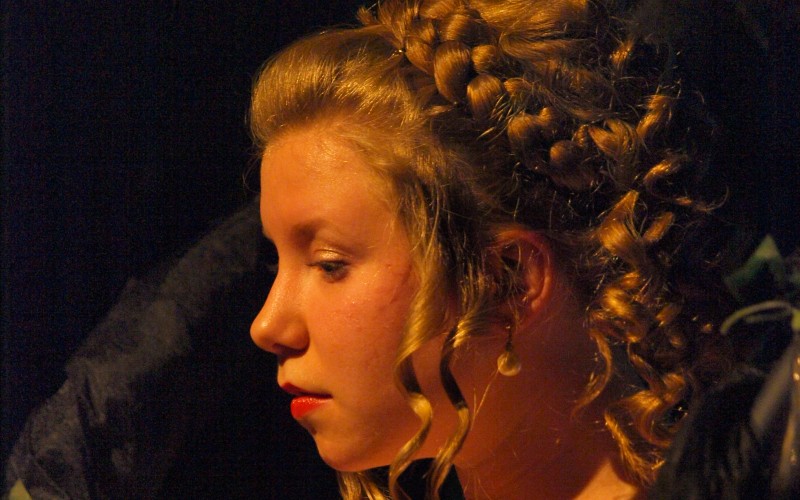 Since being adopted from Russia at seven years old, Veronica Stevens has been set on making her dreams of pursuing a career in theater performance a reality. When she first came to the United States, she spent two years in Virginia before making her final move to Vermont.
Veronica came to Castleton through the Early College Program during her junior year of high school. Although early college students can't officially declare a major, she began taking classes that focused on musical theater.
She chose to remain at Castleton to pursue a degree in Theater Arts with a concentration in Acting & Directing. Veronica enjoyed the Theater Arts program and appreciated the directing style of professor Harry McEnerny, who was also her advisor. One of her career goals was to pursue a career in film acting, particularly for action films, and she felt that her degree would enable her to pursue these dreams.
Veronica's numerous theatrical accomplishments, such as playing a leading role as Sibella in Castleton's production of “A Gentleman’s Guide to Love and Murder," definitely demand your attention. While she focuses on a particular role to give each production her all, she definitely has a couple of highlights so far. One of her early influential roles was as Louisa in “The Fantastics” with the Rockriver Players. Another role that stands out was Lucy in “Dracula," which she credits with helping her to broaden the range of her acting abilities.
When asked if there was a particular role from Castleton's productions that impacted her, Stevens replied that Mrs. Boyle in “The Mousetrap” really challenged her. Not only was this a “hard role to perform for 2.5 hours,” but it also required “lots of energy,” sometimes to the point of her getting headaches due to the high-pitched voice/uptight posture the character demanded.
Veronica manages to excel not only on stage, but in the classroom too. As for how she manages to stay engaged in both her academic and theatrical pursuits, it’s primarily due to effective “time-management” and proactively getting ahead on assignments. Having participated in theater productions since a young age, continuing this balance in her undergraduate studies has been rather effortless.
Veronica has a specific goal in mind for her future. While theater will always hold a place in her heart, she is realistic that pursuing graduate education in law will provide her with a more stable income, especially given the current state of performing arts across the country. As an adoptee from a foreign country, she wants to change the foster and childcare systems within the United States to not only support domestic children, but also those who are adopted from outside the country. In order to achieve these goals, she is currently doing prep work to take the LSAT as well as taking courses on relevant topics within the Political Science Department. After graduation, she intends to attend law school.
As she enters her senior year, Veronica is looking back on her time at Castleton. Not only has she made lasting bonds with her professors and peers, but she’s been able to explore her passions by tailoring her undergraduate experience to suit her aspirations.
When asked what advice she would share with incoming students, Stevens said, “You don’t need to know exactly how everything is going to pan out when you start. Being flexible but also focused on what matters for you and your major is pretty much all you need to because all four years are meant to provide a foundation for your future plans.”
Share on Twitter Share on Facebook Print This