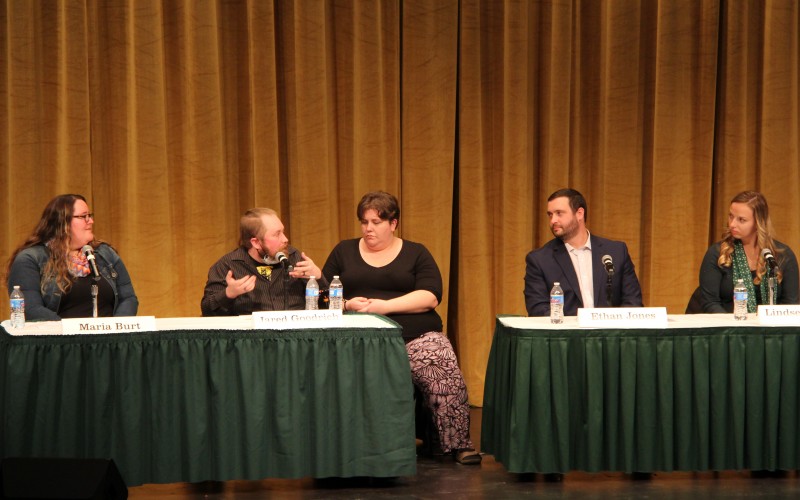 Four Castleton University alumni gathered in Casella Theater on Nov. 17 to discuss their experiences as graduates who are making a difference in Vermont.

Panelists Maria Burt ’15, Jared Goodrich ’20, Ethan Jones ’14, and Lindsey Marcy ’19 introduced themselves and how they landed in their current positions.

Burt shared her experience with Castleton’s social work program and how it led to her working for the State of Vermont’s Division of Vocational Rehabilitation, where she helps manage and organize programming for clinicians and case managers to utilize when supporting clients.

“I think that the foundation of both the social work classes that I took, as well as the liberal arts programming that I engaged in, really helped me to understand and develop some transferable skills – which in my work now as a vocational counselor – those are gold,” she said.

Goodrich followed, sharing his experience as a non-traditional student on the autism spectrum studying history and how he was able to combine his love of history and comic books to create a thesis project on the Rutland Halloween parade and the city’s representation in comic books reaching back to the 1970s. Goodrich has used these passions to open Night Legion, a comic book store in Rutland.

Next in line was Jones, who discussed his transition between majors while finding his way to health science. Jones received his Master of Public Health from the University of Virginia and was able to participate in clinical research in the Caribbean. He returned to Vermont in 2017 as a clinical research coordinator at the University of Vermont where he focuses on research in the department of surgery as well as critical care and COVID-19.

“I started with sports management, and then transition to history which I loved, and eventually I settled on health science. I think if I were to look back at my transcripts today, I would sort of recognize that, at the time, I didn't know what public health really meant. But all of my coursework that I was making for myself sort of was on that trajectory,” he said.

Marcy, who studied english with secondary education licensure, was able to secure her dream job teaching at Fair Haven Union High School, where she teaches English.

“I hadn't even graduated yet actually. I was teaching across the way at Castleton Village School and one of my former teachers texted me and said, ‘Hey, you, there's a job. Are you interested?’ And I was like, ‘There's no way they're going to hire someone who doesn't have a degree yet’ and lo and behold I got an interview. And then I had another one and then I did my teaching demo, and I had a career a week later,” she said.

A significant piece of advice was to not be afraid to ask for support when you feel lost.

“The biggest thing for me was relying on the people that I knew I could count on. Whether it be professors, friends, family because, at the end of the day, no one wants to go through what they're going through alone. It's hard. It's really hard and mental health struggles are very prevalent right now and a lot of people are affected by it. So I think just relying on the people that say they're there for you,” Marcy said.

The most resounding comments by the panelists were the value of relationships, both with professors and other students, as a part of the Castleton experience.

“What really resonated with me was relationships and that those are just so crucial. You never know, five years down the road, who you went to school with, who's sitting next to you right now, who's going to have an actual job offer for you? You never know which professor that you stayed after a class to talk to him and get a little bit of extra help from, will a couple of years down the road be able to write you a stellar letter of recommendation,” Burt said.