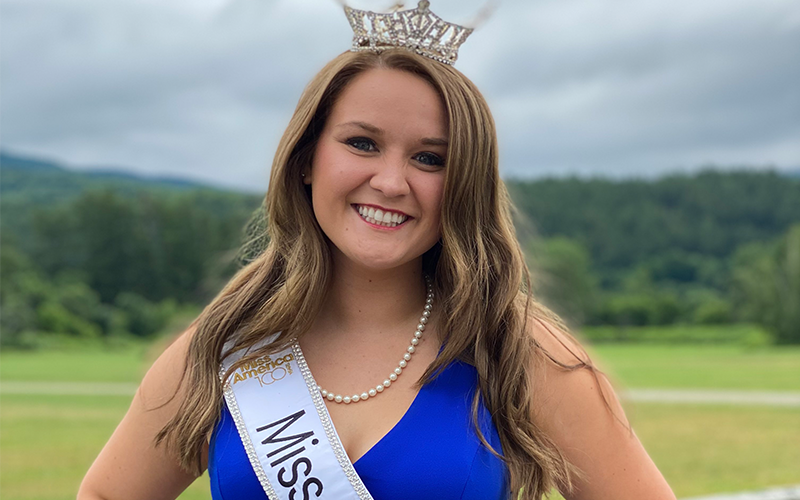 A Castleton University alumna has been crowned Miss Vermont.

Danielle Morse ’21, who studied Nursing at Castleton, was named the winner of the 2021 pageant on May 30 at the Vergennes Opera House.

The New Haven, Vermont, native first set her sights on the Miss Vermont title as a freshman in high school. That year, Danielle spent more than a month at the University of Vermont Children’s Hospital following complications from an appendectomy. After that experience, Danielle became the 2014 Children’s Miracle Network Hospital Champion for Vermont. She met former Miss Vermont Jeanelle Achee at a hospital fundraiser.

“I looked up to her instantly and thought she was so cool,” she said. “I had watched Miss America before and was so excited to meet a Vermont celebrity. I wanted to be just like her.”

Now, Jeanelle is an operating room nurse. Danielle will soon follow in her footsteps as a surgical nurse at Porter Medical Center, a small hospital located in Middlebury, Vermont. Her encounter with Jeanelle, combined with her hospital stay, influenced her career path.

“During my time [at UVM Children’s Hospital], I looked up to the nurses and left the hospital knowing I wanted to be just like them. I wanted to make patients feel cared for and special just like they had done for me,” she said.

Danielle was ready to compete in the 2020 Miss Vermont competition, but COVID-19 dampened those plans. When she was finally able to compete this year, she was celebrated as Miss Congeniality and the People’s Choice Award. 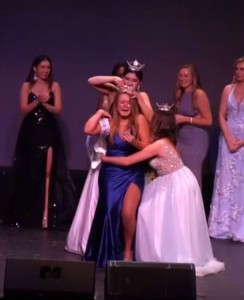 “I had worked so hard and put in so much time preparing that even before I won I knew I was satisfied with my performance and proud no matter the outcome,” she said. “When second runner up and first runner up were called, I just kept thinking that maybe it truly was going to me. When they called my name for Miss Vermont 2021, I just felt stunned. All I could think was ‘Wow, wow, wow!’ All that hard work and time paid off.”

As Miss Vermont, Danielle travels across the state making appearances at different organizations and fundraising events such as the Boys and Girls Club and UVM Children’s Hospital golf fundraiser. 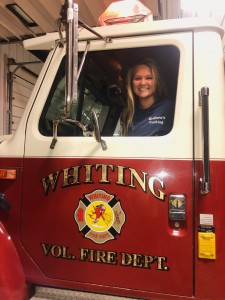 In addition to her duties as Miss Vermont, Danielle also serves as a volunteer firefighter. She is celebrating eight years with her town’s fire department this year, having joined just after her fifteenth birthday. This is just another opportunity Danielle finds to give back to her community.

“I love helping others and always have. Giving back to my community that has provided so much love and support and is extremely important to me. I have seen how volunteers have changed my life for the better, and I want to be that person for others,” Danielle said. “Whether that be for the fire department or the children’s hospital. I love the way that you can make a difference in someone’s life, especially when a community comes together to work as one.”

Danielle believes her Castleton education built a tenacity in her to achieve her lofty goals.

“My experience at Castleton taught me that no matter how many times you are pushed down or fail to never give up on yourself. You have to be your biggest fan and supporter because no one else wants your goals and success as badly as you do,” she said. “Just like my college experience, my Miss Vermont experience didn’t come with success all the time, but I eventually met my goal. I finally became Miss Vermont and I finally graduated with my nursing degree.”

Danielle will compete in the 100th annual Miss America competition this December.