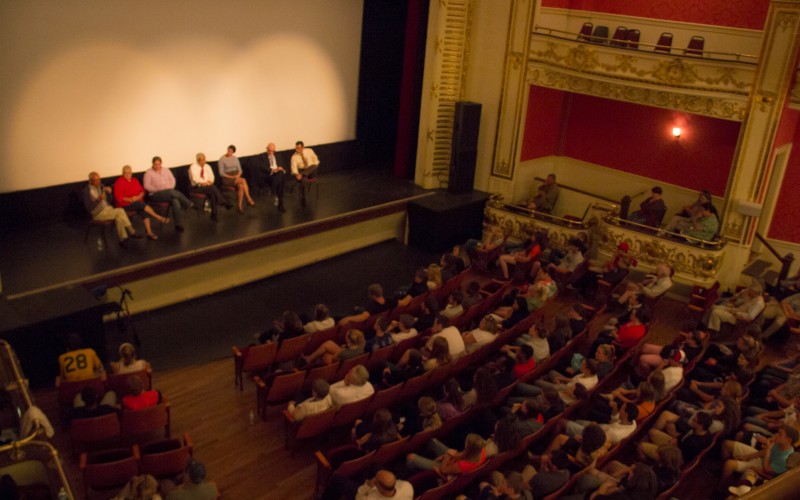 As Castleton continues with its commitment to creating a greater presence in downtown Rutland, the university is pleased to announce the recent partnership with the Paramount Theatre, which seeks to expand the arts and cultural offerings as a base for students and the community.

This fall, two Soundings events were created to fit criteria appropriate to both audiences, and showcased in the Paramount as the first-ever collaborative programming events, a partnership more than seven years in the making.

“The initial returns have been impressive,” said Director of the Fine Arts Center Rich Cowden. “We had over 600 people in attendance at the first event, with more than 200 coming from the university.”

Looking towards the future, Castleton has taken into account the students’ perspective of the new partnership and their level of support for the initiative.

Based on the wealth of positive feedback, the university aims to host at least one Soundings event each semester at the Rutland theater.

“Students have been overwhelmingly supportive of the idea,” Cowden said.

Executive Producer of the Paramount Bruce Bouchard, who was enthused about the collaboration, said he has always envisioned such a partnership with the university since accepting his current position in 2007. He explained the arts present both a teaching and learning opportunity that will be highlighted by the pairing.

“The fact that we are going to be working with Castleton is just an extension of what we do,” Bouchard said. “There are just so many benefits.”

Bouchard not only anticipates that the partnership will draw in additional revenue for the theater, but also will create a wider age spread of audience members to interact.

Moving forward both Cowden and Bouchard have been working to expand the scope of the prosperous partnership, with near-future plans for a major series of events called “Project 240: The American Experiment.”

“This project will be an eight-month long initiative that will feature performances, lectures, concerts, and debates around the general election of 2016,” said Cowden, “With a particular eye towards exploring the 240 years of the political history of the United States.”

*This collaboration marks one of many new Castleton initiatives to help support and grow the greater Rutland community and is part of a larger vision, the university’s ten-year strategic plan, “Castleton on the Move.”