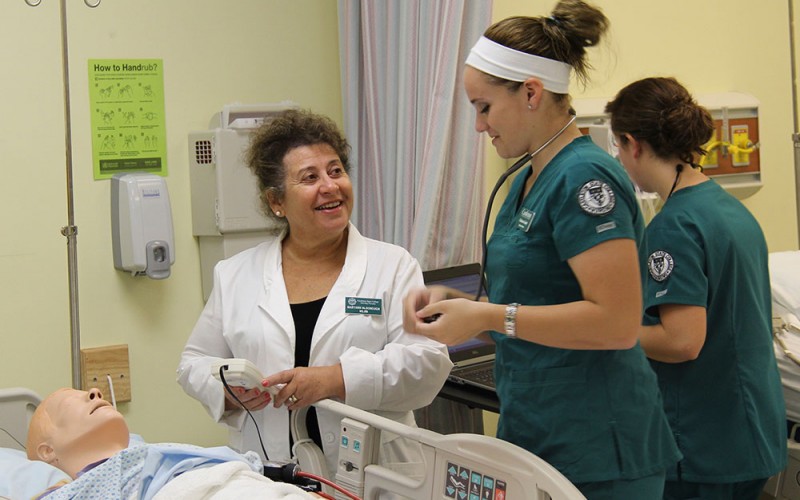 Castleton President Dave Wolk is pleased to announce that the Baccalaureate Nursing Program at Castleton has recently been fully accredited by the Commission on Collegiate Nursing Education (CCNE) Board of Commissioners.

“We were very excited to receive the Commission’s letter,” Wolk said. “We are committed to providing the very best nursing education in the state of Vermont and beyond. With the accreditation of the baccalaureate program we are positioned to provide what the profession demands, and set up to expand our offerings in the future.”

The CCNE Board of Commissioners granted the accreditation at its meeting on April 25, determining that Castleton’s program met all four accreditation standards with no compliance concerns, the board’s highest recommendation.

Castleton Director of Nursing Ellen Ceppetelli led the accreditation effort on campus and feels that the program is poised to be a leader among its peers. “As one of only three CCNE accredited baccalaureate nursing programs in Vermont, our vision is to become a center of excellence in baccalaureate education that will include a pre-licensure track and exploration of an accelerated baccalaureate program for individuals who want to become nurses but hold degrees in other disciplines,” Ceppetelli said.

The accreditation action is effective as of November 6, 2013 and extends to June 30, 2019. As Castleton’s Nursing Department expands to include the second Bachelor of Science track in Nursing over the next few years, it will be phasing out the current Associate of Science in Nursing. This change is in direct response to meet the needs of prospective students, the community, and healthcare facilities that the university serves. In addition the program will have the flexibility to take on many different tracks to meet the needs of traditional college students, and professionals seeking advanced education in a traditional classroom setting, as well as those seeking a hybrid approach through online learning.

Area healthcare facilities that Castleton partners with include Rutland Regional Medical Center (RRMC), Glens Falls Hospital, Dartmouth Hitchcock Medical Center, Fletcher Allen Health Care, Porter Medical Center and Rehab, Genesis, Rutland Area Visiting Nurses Association, and the Vermont Department of Health. The accreditation will have a direct impact on these facilities through clinical placements and the eventual hiring of a more educated nursing workforce, an expectation of the Institute of Medicine Report on the Future of Nursing (2010).

“Rutland Regional is so pleased that Castleton has received accreditation for its baccalaureate program in nursing,” Tom Huebner, President and CEO of RRMC said. “This builds on the strong program they have had for many years and is important to the direction nursing is taking for the future. Castleton has been a strong partner to Rutland Regional as we all work hard to meet the health needs of our region. It is truly a great achievement.”

Chief Nursing Officer at RRMC Carol Egan echoed Huebner’s enthusiasm for the achievement. “The nursing department at Rutland Regional Medical Center is thrilled to learn that Castleton has received accreditation for the bachelor's degree program. We look forward to partnering with Castleton as we work to achieve our goal of 80 percent BSN staff by 2020. The relationship that we have enjoyed through the years will only strengthen as we move forward.”

Castleton continues to accept well-qualified applicants to the Associate and Baccalaureate Programs for fall, 2014 enrollment.