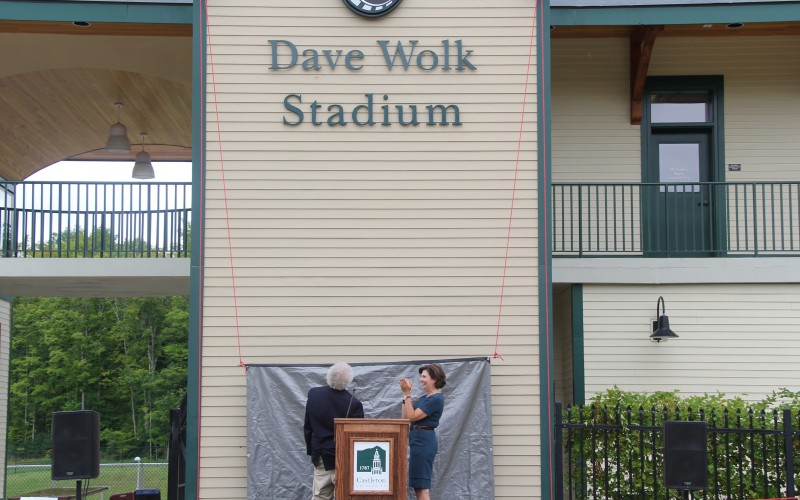 Wolk, who was the architect of more than a decade of growth at Castleton University was credited in remarks from Dr. Scolforo with providing the "vision and determination" that brought football to Castleton. "We're eternally grateful that we get to enjoy beautiful Vermont Saturdays each fall watching football in this gorgeous stadium, but the stadium itself represents so much more than a venue for one team," Scolforo said. "In addition to hosting countless Castleton field hockey, football, soccer, and lacrosse games, the stadium has been the stage for high school championships, elite sports camps, all-star games, amazing performances from the renowned Boston Crusaders-even the backdrop to several weddings."

Scolforo credited Wolk with understanding that the stadium would be an opportunity to introduce countless people to the University who otherwise would not have had the opportunity. According to Scolforo, Wolk's "legacy is all about seeing and understanding what makes Castleton special, elevating it to the surface, instilling pride in the community, and inviting others to experience it."

Spaulding referred to the stadium as "The House that Wolk Built" a reference to the former Yankee Stadium's nickname as "The House that Ruth Built." He noted that while the stadium is most certainly "the Cherry on Dave's Castleton Sundae" it is just a piece to a greater picture that includes nearly $80 million in infrastructure investments to the University. "This proud institution would not be anything like it is today without your love and leadership," Spaulding said. "We all know for certain you most surely deserve today's honor and celebration."

Dr. Hindes provided the standing room crowd with some lighthearted moments as he spoke of his failed proposed naming opportunities for the former president such as the "Wolk Walk" for the sidewalk in front of the library or "Dave's Dome" atop the Old Chapel. He also drew thunderous laughter as he detailed his previous disdain for "the Spartans" as a proud Iowa University alumnus-referencing the famous Big Ten rivalry with the Michigan State mascot that shares a name and colors with Castleton as he struggled to say the words "Let's. Go. Spartans." He also provided one of the more poignant moments of the dedication as he said the "only place on campus big enough to hold David's enormous heart and love for this grand university is this stadium." Hindes concluded his remarks with highlights from the resolution that officially named the university stadium after Wolk in December.

As Wolk spoke from the podium he pointed out the students, faculty, and staff in attendance who had made the growth and success of the university during his tenure possible. "I am so grateful to Karen Scolforo for truly embracing and carrying on the 'Castleton Way' which has been so important and remains important as you are the small university with a big heart," Wolk said.

He thanked Tyson and Senior Associate Athletic Director Tim Barrett for their abilities in leading the department of athletics through such wide sweeping change. He lauded the facilities staff, including Director Chuck Lavoie, former Assistant Director Rick Wareing, and the entire custodial and grounds crews for their diligence in caring for the facilities. He thanked members of his family, others in the crowd, and the thousands of students who "came to Castleton and made a difference there before going out and making a difference in the world."

Scolforo and Wolk unveiled the new signage on the clock tower together as the Spartan Marching Band provided a fitting drumroll. As the crowd stood and cheered, the two leaders of the university shared a private moment and embrace, clearly soaking in the moment and enjoying the Spartan pride. 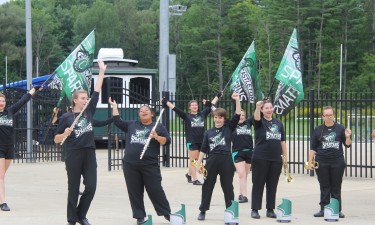 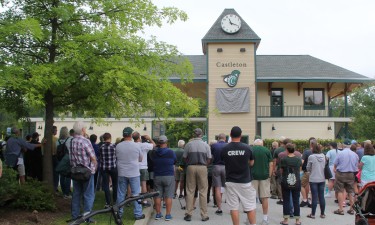 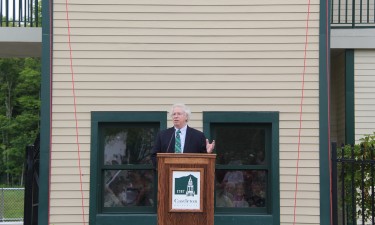 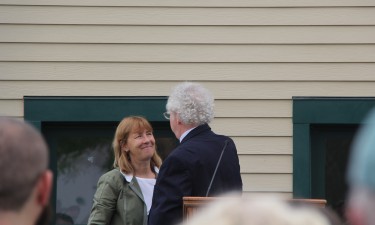 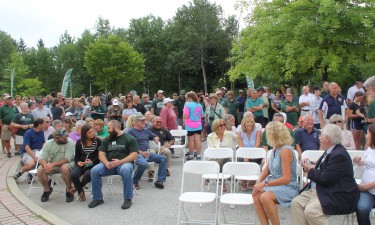 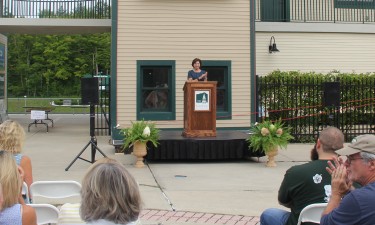