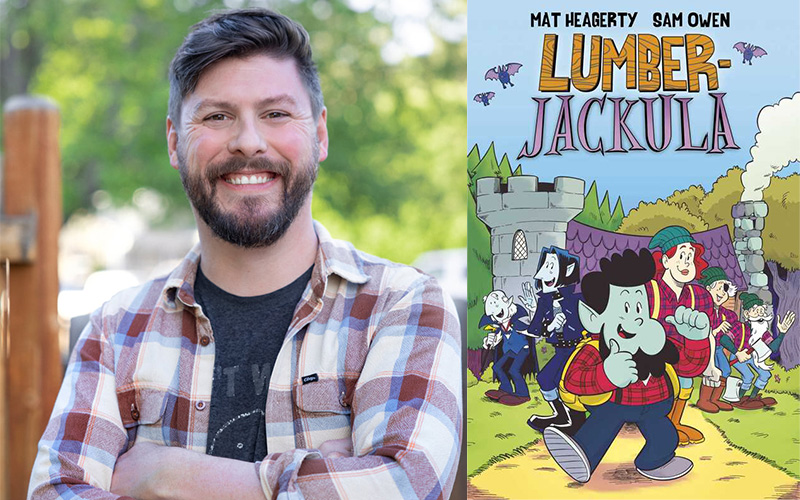 After graduating from Castleton in 2005 with an Associate’s degree in Communication and Media Studies, Mat Heagerty pursued a life as a punk musician.

Throughout his punk rocker era, he was creating comics and zines in the background. Some projects pulled double-duty, serving as promotional materials for his bands' gigs, and some were simply passion projects to grow his skills.

“During that time, I did some self-publishing. There was a little while of just trying to get anyone to look at anything, especially when you're just writing comics and not drawing them, which I decided early on was my main focus. It's an uphill battle to get people to look at your work, because you have to say, ‘Hey, look at the script,’ and that's not appealing to a lot of people,” he said.

Through the recommendation of his brother, he became an early adopter of Kickstarter, the fundraising platform, and became one of the first comics listed on the site. “The Great Regression” was fully funded in 2011. Originally developed to be “a 12-page epic”, only one issue of the series wound up being fully produced.

The major takeaway from that project for Heagerty? Start small. “Everyone wants to write their 200-page book. Everyone wants to write their 24-issue miniseries or series, because those are the things that inspired them, those are the things that they loved. But you’ve got to like, get on your training wheels. There’s so much learning in that first two or three projects, even if it's just a one-page comic, even if it's a five-page comic,” he said.

As a dyslexic person, Heagerty was a “reluctant reader” as a kid, and comics were how he learned to read with confidence. The combination of context clues from illustrations as well as having smaller word blocks made an incredible difference for him as he developed his reading skills. Because of this, he considers all of his books as being targeted toward reluctant readers as well.

Not long after “The Great Regression” project finished; he had what he considers to be the two breakthroughs that helped him to be seen as a legitimate contender in the comic space. First off, the publishing company Oni Press held open submissions that weren’t restricted to already established creators. His submission, “Unplugged and Unpopular” was chosen to be published. The second factor that changed his trajectory was when he got an agent to represent him.

However, having representation doesn’t mean everything is easy now. Due to the nature of publishing cycles, many of his novels are fully written and illustrated long before they hit shelves and get into the reader's hands. His upcoming publication, “Lumberjackula”, has been finished for a year.

“But I think the biggest challenge, I think of all, is getting people to say yes … It's convincing people that your art is worthy to be out in the world, which thankfully, I have someone who's helping me with that now. And it's so much different than it was in the early parts of it. But I look forward to the day where I can be like, ‘hey, come to me’,” he said.

As a previously independent and now early career comic, there are some aspects of promotional work that fall on Heagerty himself versus being managed for him by his publishers. This is where he says that a lot of his Castleton education shines through to this day.

“My introductory media class, for communications, I learned so much from that, that I use just all the time. Just as simple as like press releases, and all of that. You have a team of publishers who do stuff, but unless you're the top tier title, if you're a big name, you really do need to do a lot of it yourself.” he said.

“And my creative writing class, I hadn't really thought about what the components of the story were, and I remember learning that in that class, and it really like opening up how I thought about telling stories. I still very much use structure from those classes”.

Ultimately, Heagerty wants to foster a sense of connection and belonging for the young people who read his books.

“I want to write lots of books that make kids happy, just inclusion in every single way possible … I want to do that and I also really want to do some more work in Animation. I'm starting to kind of take tiptoes into that world, haven't gotten paid yet, but I'm doing it. And that's really fun. I'd love to be able to do some writing for kid's animation, and then just keep on doing it as long as people will let me. And then afterward, I'll still do it for myself,” he said.