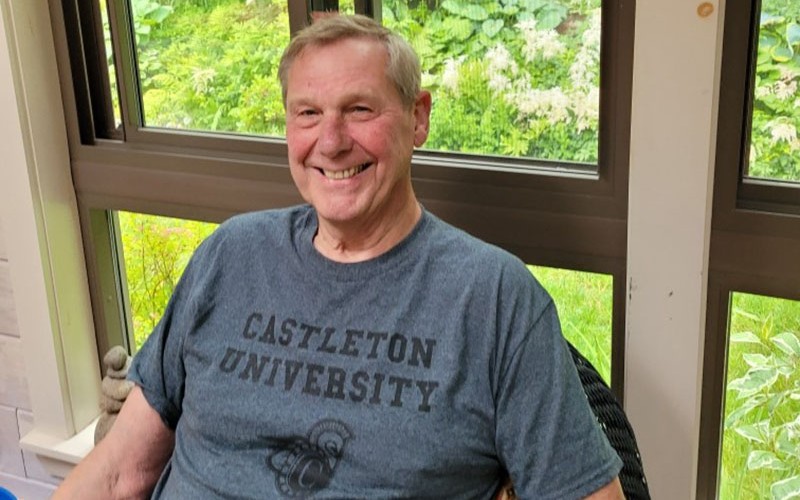 Recognized for his long-time dedication to Castleton and passion for his local community, Dennis Wright ‘68 ‘79 was the 2020 recipient of The Castleton Way Award presented by the University and Castleton Alumni Association. This one-time specialty award was given to Wright for his embodiment of the cornerstones of leadership, civility, respect, community partnership, and giving back generously with both time and resources.

Wright served in Vietnam from 1969 to 1971 then went on to hold an extensive 38-year career in education teaching Social Studies throughout New England, including being Team Leader and Dean for eighth-grade social studies for 10 years in his hometown of Jaffery, NH. In 1995, he was selected by the Daughters of the American Revolution as the American History Teacher of the Year for the State of New Hampshire.

Upon retirement from teaching in 2005, Wright owned and operated the successful Wright Painting and Paper Hanging, taking on projects throughout Vermont and New Hampshire.

His service and commitment to bettering small town communities continue through his role on the Board of Trustees for the Park Theatre, which provides and promotes artistic, cultural, entertainment, and educational programs and activities for the communities of the Monadnock Region of New Hampshire, in addition to his position on the Castleton Alumni Association Board of Directors, which he has held since 2013.

Wright has been a steadfast supporter of Castleton University with nearly 30 years of giving in the areas of time, talent, and treasure. In 2019, Wright Painting donated all its labor hours to the renovation and restoration of the historic Granger House located on campus, and a recent multi-year pledge significantly bolstered student scholarship resources for deserving Castleton students.

The Castleton Way Award was to be presented to Wright at the annual Castleton Gala in June 2020 which was postponed due to the COVID-19 pandemic and will instead be presented at a small campus awards gathering in August.