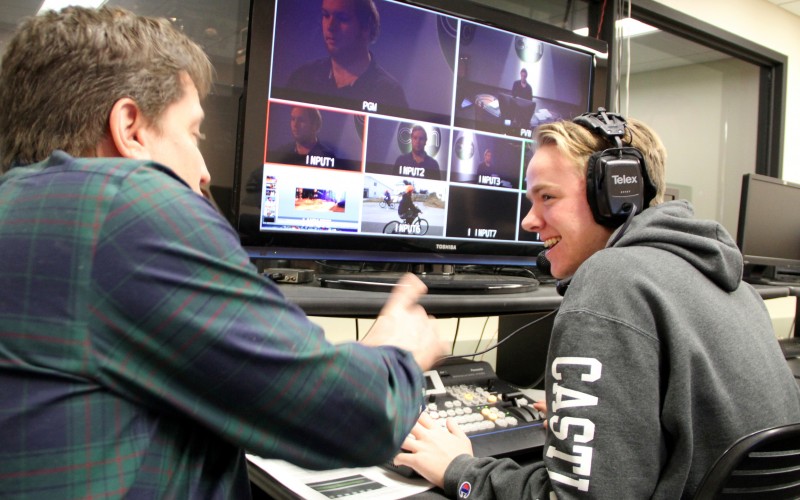 Castleton University is moving swiftly into the future. Having added several cutting-edge initiatives already this spring and summer, the university announced Thursday that it will be adding eSports to its growing list of club sports offerings. eSports is one of the fastest growing industries in the world and counts millions of gamers, fans, and some of the world’s largest investors among its supporters. Chief Technology Officer Gayle Malinowski and Castleton sophomore Jac Culpo (pictured above editing video with Professor Andrew Wilson) will serve as the advisor and club president respectively and the duo has already taken the lead in recruiting team members.

“We sent out emails to current and admitted students earlier this summer letting them know we were starting eSports and almost immediately we had 20 students reply,” according to Culpo. “With the growth and popularity of the industry, and the investments pouring into the gaming world, there is one major market that has still gone largely untouched, and that’s collegiate eSports. There are only around 60 varsity teams in the country and a few dozen club-level organizations like ours.”

Varsity sports have been a strong presence at Castleton University dating back to the early 1960’s when teams competed in the NAIA. A transition to the NCAA Division III in 2001 signaled growth was on the horizon.

“The growth in varsity sports at Castleton University has been well documented,” said Castleton University President Dr. Karen M. Scolforo. “Since the turn of the century, we have more than doubled our varsity offerings from 12 sports to 28 and more than quadrupled the number of student-athletes on campus from 150 to nearly 700 during that same span. This fall we will have a record number of student-athletes on campus thanks to some of the recent recruiting initiatives we’ve added. I am thrilled to see club sports now taking off and flourishing thanks to an empowered student body.”

As a former student-athlete and coach at Castleton, Dean of Advancement Jeff Weld appreciates the growth and attention that varsity sports has provided the university, but the growth in club sports has infused new energy at the university. “Club sports at Castleton has become this burgeoning avenue for our students to create, operate, and compete in a sport about which they are passionate,” Weld said. “I have watched with amazement as our students come up with an idea, take it to Chappy (Chris Chapdelaine, Club Sports Advisor), and together they just blow it up into this amazing opportunity for our students.”

Chapdelaine has been instrumental in empowering students and cultivating a growth mindset that has brought club sports to the forefront of the university. “There is no limit to the growth of club sports,” said Chapdelaine. “It is all about our students and what they want to do and see at the university which makes it very rewarding to see ideas come to fruition. They provide an opportunity for many to continue to do something they love in an environment that supports their interests while getting the personalized, high-quality education Castleton offers. My mindset has always been, ‘the more opportunities we can offer the better’ and then I’ve just tried to support our students as best as I am able.”

Chapdelaine is well-known by many as the head coach of the Spartan varsity women’s soccer team. He has guided the team to conference championships, earned Coach of the Year honors, and has built a program based on hard work and respect in the classroom, on the field, and in the community. It is this dual role which has allowed for Chapdelaine to have a unique perspective on the club sports community. “As a varsity coach, I make a majority of the decisions for our program based on what I believe is in the best interest of the university and our students. One of the really cool things about club sports is that the students make the decisions based upon meetings they have with teammates and they utilize a formal governance structure. My role is to help guide them through the process and assist in building their vision using my experiences in athletics and with the broader university community.”

Castleton students have recently added badminton, bowling, cycling, curling, and ultimate frisbee to the growing list of club sports. Badminton and cycling each boast rosters of more than two dozen students, while the bowling team had the fourth-ranked bowler in the country this past season. The success of these programs makes the prospects for eSports very enticing.

According to Weld, the potential of eSports is endless. “I know just enough about eSports to know it’s a win-win for us to add,” Weld said. “When the League of Legends is selling out 80,000 seats in an Olympic stadium to witness their championships live, and another 57 million are tuning in online, you know there is huge potential. I am a traditional sports fan who was admittedly skeptical of the potential at first, but those numbers are staggering when you consider 40 million people watched Game 7 of the 2016 World Series and that set a 25-year high water mark.”

While Castleton considered adding eSports as a varsity program initially, the decision to encourage its students to build the program before eventually elevating it to varsity status held vast appeal to all involved.

“Our students are the ones with the knowledge base in this arena,” Weld said. “It’s not as if we are adding a traditional sport such as football or ice hockey where there is a very clear model to follow. This is all very embryonic, and to have students at the forefront means that the program will be built through their lens, making it more appealing to future Spartans.”

With several opportunities to create meaningful collaborations both on campus and off, Weld has seen a wealth of new energy born from this single club. “My role with the university is to build bridges, create connections, and advance the university utilizing a collaborative process. There are very few opportunities where I can point to a single club and say, the Information Technology staff is excited about helping with technology infrastructure, the Student Life office is excited about more opportunities for student engagement, the Admissions office is excited about another engaging enrollment driver, and the Development office has an untapped avenue to seek new funding partners and naming opportunities. It’s just a quintessentially Castleton moment, where everyone comes together in support of our students to build a transformational experience. For me, it doesn’t get any better than that.”