From Castleton to Career 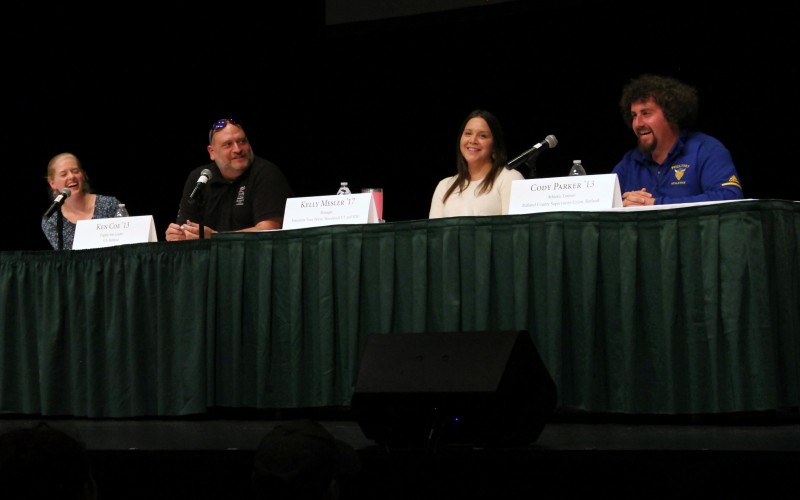 Castleton University welcomed four alumni working in a variety of different careers back to campus to share their stories and advice with current students at the fourth annual Making a Living, Making a Difference panel.

Before coming to Castleton, Hollie (Nop) Bachilas – a Vermont native – was set on attending college out of state, considering colleges in Michigan and Virginia.

“The night before the deadline, I decided to go to Michigan. I woke up the next morning and I couldn’t make the call to let them know I was coming,” Hollie said, adding that this decision led her to Castleton. “I’m so glad I made that choice.”

During her time at Castleton, Hollie was an active leader in the community, serving on the Student Government Association and in various clubs, as well as working for the Career Services Office. After graduating with a dual major in Business Administration and Spanish, Hollie began her career at Porter Medical Center, an affiliate of the University of Vermont Health Network. In a short period of time, she has transitioned from an HR generalist to an HR specialist role, and now assists with the health center’s recruiting efforts. Hollie returns to campus often in her recruiting role to help the next generation of Spartans find their career path.

Ken Coe, a U.S. Army veteran from Essex, Vermont, was a stay-at-home dad for 10 years before joining Castleton as a part-time student studying Information Technology. A former land surveyor in the Army and in Minnesota, Ken’s CIS professor encouraged him to apply for an internship with GE Aviation in Rutland. GE Rutland is the largest producer of jet engine compressor blades and vanes in the world, employing more than 1,400 people at two locations in Rutland City. After completing a year-long internship, Ken became one of those 1,400 employees, serving as the digital site leader.

“Castleton connected me with people that changed my life,” he said.

He also shared some advice with current students.

“Never burn bridges. You never know who you’re going to need in the future. That person sitting next to you may be your boss. The person in class can and likely will impact you someday,” he said.

Kelly Mesler started her educational journey at Johnson & Wales University in Rhode Island, but soon learned that city life just wasn’t for her. She made the most of her time at Castleton by becoming as involved as possible in the community, serving in clubs and working on campus. After graduating with a degree in Psychological Science, Kelly began working at Maximize Your Talent, an organization focused on teaching soft skills that are proven to build optimal performance while minimizing the impact of worry, stress, and hurry. In her position – which allows her to work remotely from Woodstock, Vermont, and regularly travel to New York City – she works with Art DeLorenzo, a 1964 graduate of Castleton.

“I love that I can do what I love and to help people become the best they can be,” she said.

Cody Parker came to Castleton and knew he wanted to become an athletic trainer. When it came time to apply for the program, he was on the borderline of meeting the academic requirements, but he went to his professors and told them that while he may not be the best with book learning, he excels in the hands-on aspect of athletic training. After being accepted into the program, Cody worked hard to show his dedication – logging 1,600 hours of clinical experience, despite only needing 800 hours to sit for the board exam to become a certified athletic trainer.

After graduation, Cody completed an internship at the University of Vermont, working with their club teams in addition to assistant teaching in two athletic training courses. When he returned home to Rutland, he began working at a local physical therapy clinic and provided athletic training services at West Rutland School on a part-time basis. When his job shifted at the clinic, he approached West Rutland about working as a full-time athletic trainer. They agreed, but only on a year-to-year basis. Cody spent the first-year proving his worth, and now works full-time as the athletic trainer for Poultney, Proctor, and West Rutland High Schools.