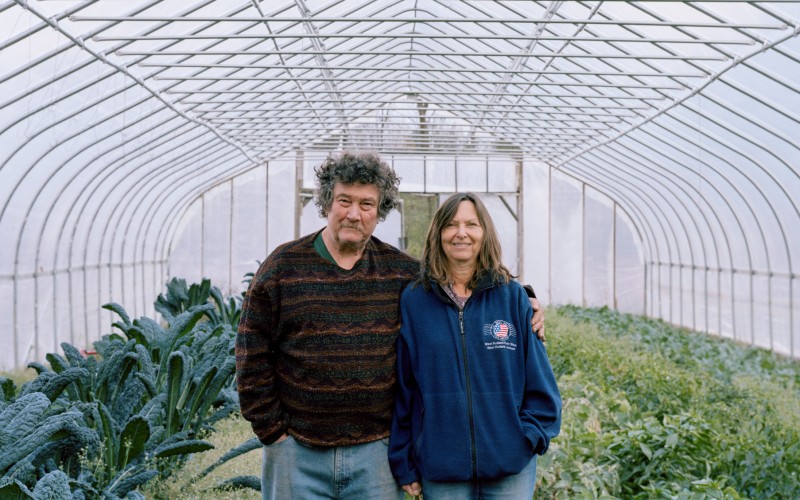 The interviews they recorded tell stories of diverse agricultural systems and communities thriving in many parts of Vermont, and in particular, a node of activity in Rutland County. Sharrow described his early meetings with farmers in the Rutland area as revealing “the spokes on a wheel”, with the hub located at Boardman Hill Farm, where Greg and Gay Cox have lived and farmed for more than three decades.

Growing Food, Growing Farmers is an intimate look at the expanding community of young farmers in Rutland County and the surrounding area. The exhibit showcases farmers through large-format photographic portraits by Macaulay Lerman. Sharrow’s metaphor of the “wheel,” a central theme of the exhibit, is conveyed in the form of biographies and audio interview excerpts that complement the portraits of more than a dozen current and former farmers, many of whom trace some aspect of their agricultural trajectory to the Cox’s mentorship and generosity.

The ethnographic interviews conducted by Sharrow and Kolovos, and the resulting biographical and audio content in the exhibit, share the experience and insights of the farmers in their own words. The large-scale photo portraits—nearly 4 by 3 feet—were created with a similar intention in mind. Lerman’s photographic process is ethnographic in spirit and echoes the philosophy of deep listening and collaboration that forms the Folklife Center’s approach to cultural research.

“Primarily, I work with a 4x5 view camera, an old and yet relevant technology that forces my subject to remain as still as possible for around 10 minutes while the image is made,” Lerman explains. “In the digital age this may seem like an eternity to some, but the need to slow down often relaxes me as well as my subject, and allows for an organic conversation and honest depiction.”

Growing Food, Growing Farmers is the product of a collaborative ethnographic research approach: making visible the experiences of one community of farmers that exists within the larger network of local food production in Vermont.

The opening reception for Growing Food, Growing Farmers is Monday, July 26 from 5:30-7:30 at the Castleton University Bank Gallery in Downtown Rutland. Complimentary locally sourced food and beverages will be served.

This exhibit is made possible with support from the Vermont Folklife Center Vision & Voice Gallery underwriters including: the Rotary Club of Middlebury, Vermont; Cabot Creamery; the Vermont Community Foundation; the Vermont Arts Council; Castleton University; and by the Center’s many generous supporters across the state.

The Castleton Bank Gallery is currently exhibiting in their window spaces in collaboration with Rutland Art Ramble.

The Vermont Folklife Center’s mission is to broaden, strengthen, and deepen our understanding of Vermont; to assure a repository for our collective cultural memory; and to strengthen communities by building connections among the diverse peoples of Vermont.