Joanne (Kelly) Webb: A Desire for the Skies 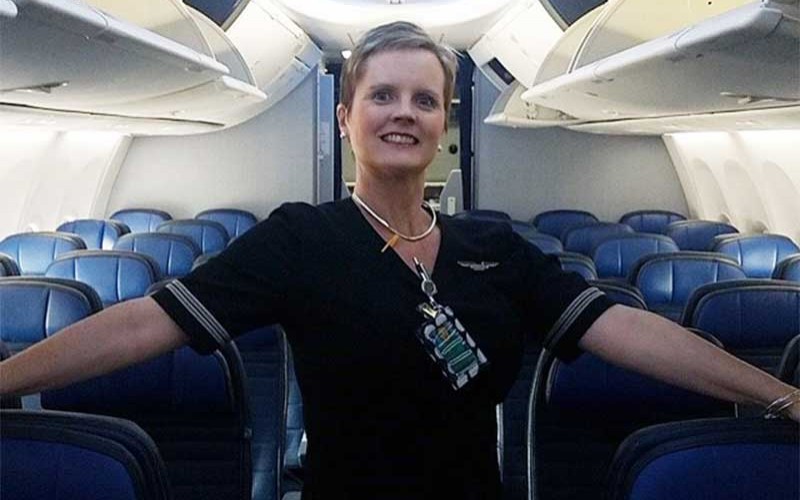 When Joanne (Kelly) Webb was working toward her theater degree at Castleton, she found herself listening eagerly to the stories of two of her closest friends who spent a semester studying abroad in Bath, England.

“There was no way I could have done that, financially. I was more than a little jealous,” she said.

After graduating Castleton in 1997, this yearning for travel led her to start a career as a flight attendant for Continental Airlines based in Newark, New Jersey. Spending the next five years “on reserve,” Joanne would often wake up in the morning not knowing where in the world she’d be sleeping that night. She was finally earning her miles as a world traveler, and soon she found herself in the city in England she had dreamed of visiting while on the Castleton campus in Vermont.

“I went with my crew members and explored the Roman baths, had fish and chips, went through a hedge maze, and it was the most memorable layover I have ever had,” she said.

When United Airlines and Continental Airlines merged in 2012, Joanne began working out of Denver, Colorado. She then found herself working about 15 days a month, somedays flying to San Francisco, and then flying back to Denver to sleep in her own bed. When the crisis in Syria reached its height in 2014, Joanne had the time to help.

“The first thing I learned is how lucky I really am. Once or twice a week, I would help at what was called Job Club. In the mornings, new refugees would attend English classes at a technical college," she said. "In the afternoon, they would come to Job Club, where we would teach them about the professional culture in the United States. We would also help them learn how to use a computer. We would create resumes for them and drive them to and from job interviews. It was a wonderful experience.”

While working with the refugees, Joanne discovered she loved helping people with their careers and began to apply this newfound knowledge to her job as a flight attendant. She created a Facebook group called “Get Your Wings, Prepare to Takeoff” to help people navigate the application process.

She soon realized there was no resource for people who had decided to pursue this career, so she started an online boot camp talking about a different type of flight attendant or a different airline each day. The popularity of her online boot camp-inspired her to self-publish a book on the subject. “Desire the Skies, the First Book Every Aspiring Flight Attendant Needs to Read,” which launched on Kindle in November 2019.

Looking back at her time as a student at Castleton, Joanne offers this advice:

“Follow your dreams wherever they take you, but return to Vermont as often as you can. I moved to Colorado because I thought it would be like Vermont. Nothing is like Vermont. Enjoy it.”