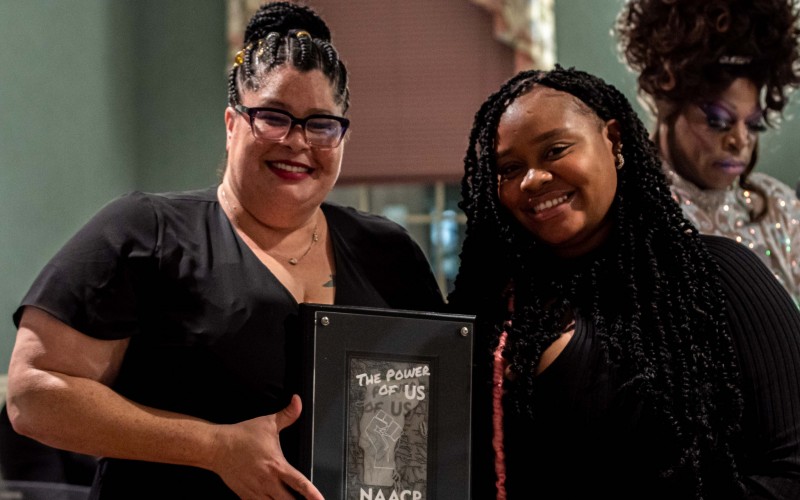 This wasn’t the turning point for Kayon though. Originally she had her eyes set on the University of Rhode Island but didn’t feel that attending a school so large would be a good fit for her. At that point, she started exploring private schools, which tend to be smaller in scale. It was during her deliberations that her coach mentioned Castleton as a potential option for her.

“I was hesitant! In fact, I applied to it last. It was the last school I applied to – I didn't even tour it. I’d never even heard about Vermont; I didn't know what to expect. But in the end it kind of just aligned more. I spoke with admissions a lot, and they were really kind, and it just really pulled me here,” Morgan said.

Now in her third year, she has made a long-lasting impression on campus through her service to the community as a peer mentor, admissions student worker, tennis team member, and current president of the Castleton NAACP chapter.

In recognition of the work that she has done, Morgan was honored with a Youth in Action award by the Rutland Area NAACP branch at its Freedom Fund Dinner this past October.

“I go to classes and I sometimes am the only person of color in my class. And I got involved because, in a way, it kind of felt isolating,” she said.

These dynamics highlighted a need for more community on campus and added fuel to her natural propensity for showing up for others.

“Community is so important to me. It's so important to me. I feel like I was raised by my community. A lot of times I feel like I wouldn't be where I am if it wasn't for someone kind, or someone that was not obligated to care, but they still did. So I try my best, even though I'm not obligated to contribute or carve out this space that's in the Castleton community, I want to. It's like a drive for me and, and a passion,” she said.

Being invested in social change takes an extraordinary amount of mental and emotional perseverance, one of the things that Morgan was lauded for when receiving the award.

“In a state where it's really homogenous and there are so few people of color, when white people want to do work in this way they just have any old black person or any person of color and say, ‘Hey, can you be on my DEI committee?’ Or ‘Can you do these things?’ And quite frankly, not everybody's called to that work,” said Rutland Area NAACP branch President Mia Schultz.

“To see somebody being called to that work and really taking it seriously and doing the work, the research, the learning, the professional development, and the personal development, because again, this is not easy work ­– it taps at all that you think you know about yourself. To see Kayon step in with enthusiasm, and more than that, just a dedication to changing the world…It gives me hope and it gives me relief that this is work that won't stop,” Shultz said.

The purpose of the award is to offer a token that can act as a reminder that there is always a network of support for awardees to fall back on.

“The message we want to send to her is that we are not only proud of her in this moment and what she's accomplished to this point, but that we are here for her, and we are proud of her, in perpetuity,” Shultz said.

That message was received loud and clear by Morgan.

“It literally means so, so much to me. I think one of the most impactful parts of my journey in college so far is being in the NAACP [chapter] and I’m so thankful that I get to be president of it and lead it on this campus. So being recognized by the [NAACP] organization, that's just honestly made my heart so full, I'm so appreciative. It literally just made everything for me and regardless if I got an award or not, I still would've continued, but it was just so nice to just feel uplifted and appreciated and I'm just so thankful. I couldn't believe it when they told me. I'm just so thankful,” she said.