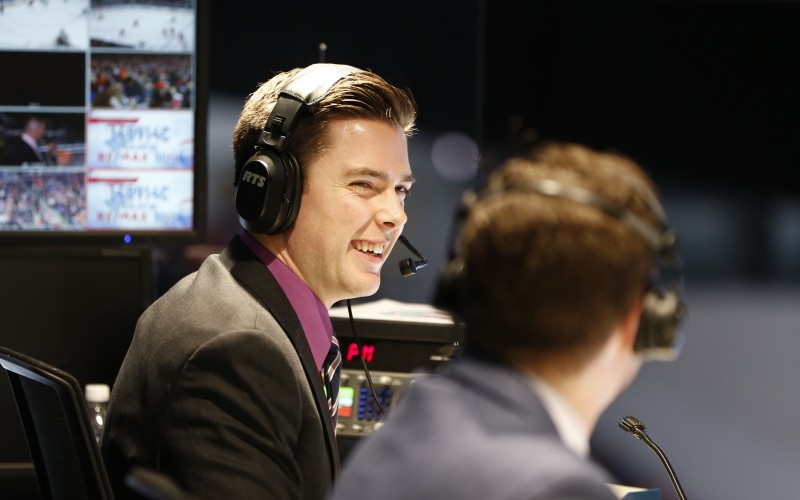 Before the puck drops at an Edmonton Oilers hockey game, Lindsey Gullett has already put in a full day’s work.

The 2012 graduate of Castleton University works as manager of event presentation for the Oilers, an Alberta, Canada-based team. On game day, his primary responsibility is to oversee “the show.”

The Wawanesa, Manitoba, native – who studied Communication and Business Administration at Castleton – works with each department across the organization to ensure the proper messaging is being delivered to fans. He also works alongside the creative team to produce the show’s opening video, along with other creative content that is displayed each night.

“Every minute of the game is accounted for in our script that I am responsible for producing, and we make sure the timing is perfect so that broadcast, teams, and all other parties involved are aligned for the exact puck drop time for that game,” Lindsey said.

You could say that hockey is in his blood.

“As a kid who grew up on the prairies in Canada, there’s not many other options. The winters are too long and cold to not be doing something. I fell in love with it at a young age with all my buddies, and it has shaped me into the person I am today. The network I’ve created, the places I’ve traveled, my career. I owe a lot of it to hockey,” Lindsey said.

Hockey was one of the things that brought him to Castleton. He was playing junior hockey in Canada and saw it as an opportunity to go to school, travel, and continue to play the sport he loves.

“The overall experience at Castleton was great for me because it forced me out of my comfort zone. I went to an unfamiliar place where I knew no one and it presented me with new challenges each day. Once I got settled into my new surroundings, I realized how great my professors were and how amazing the support system was around the hockey team,” he said.

After graduation, Lindsey took a sales job in Pennsylvania while his then-girlfriend and fellow Castleton alum LeeAnne Ketchen ’10, completed her master’s degree. After a year, the couple moved to Virden, Manitoba, and he took on the role of sales and marketing manager for the Virden Oil Capitals, a Junior A Hockey team.

“It was there where I really got to sink my teeth into sports and entertainment,” he said. “I was responsible for everything from game presentation to ticketing to sponsorship. It really allowed me to figure out what I liked and didn’t like about the industry.”

By 2015, Lindsey was working with the Manitoba Moose of the American Hockey League as manager of game presentation, a position that allowed him to focus on game day atmosphere, specifically on the music, videos, and promotions that took place throughout the night.

In 2017, he and Ketchen (who were married in 2014 by former Castleton President Dave Wolk), moved from Winnipeg, Manitoba, to Edmonton, Alberta, and Gullett made the jump to the National Hockey League. He is about to enter his third season with the team, which plays for 18,500 people in the world-class Rogers Place venue.

“It was very bittersweet [to land with the Oilers] because although this was a dream opportunity to work in the NHL, we had to make some personal sacrifices to move away from family and friends to pursue it. However, once we arrived in Edmonton and got comfortable in our routine here, it quickly became home to us,” he said.

Lindsey and his team were recently recognized with back-to-back Golden Matrix Awards for Best Overall Video Display Content among NHL Teams. Edmonton was also a finalist for the Best Special Occasion Video and Best Music Video at this year’s awards. The Golden Matrix Awards recognize artistic and technical excellence in several categories of electronic display production.

“Our team puts a lot of pressure on themselves to do things well, so it’s a bit of a blessing and a curse when you win something like this because you feel like you have to constantly outdo yourself the next season, and it can create some extra pressure,” Lindsey said. “But I will say, in the words one of my mentors at Castleton, Jeff Weld, ‘pressure makes diamonds,’ so I think we’re just going to continue to embrace it for now and see where it takes us.”