Skip to Main Content
Home News & Media Love and Service to Community and Country: Marie and…

Love and Service to Community and Country: Marie and Chase Laukhuf ‘10 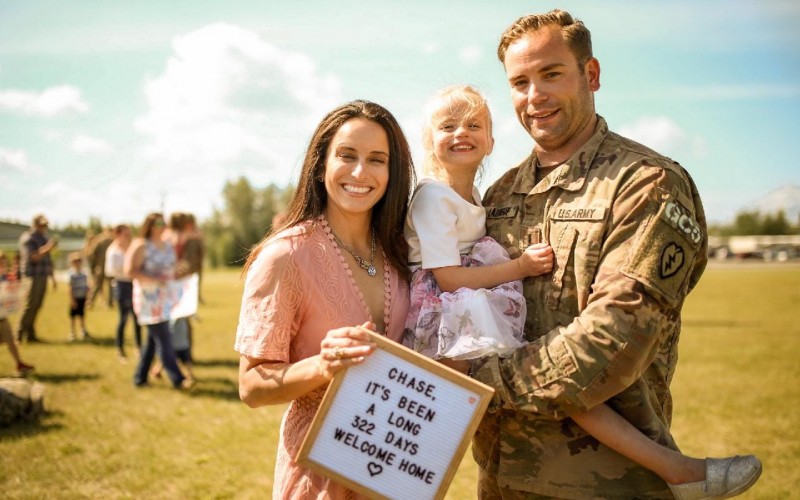 Service to others and creating a connected community are bonding beliefs that husband-and-wife alumni team Marie and Chase Laukhuf '10 share. The couple met at Castleton in 2009 and have been inseparable ever since.

“There are not many people who I would follow all over the country and world, but I can’t imagine life without him, so where he goes, I go,” exclaimed Marie.

Marie graduated from Castleton with a Bachelor’s degree in Sociology in 2010, a post-baccalaureate certificate in secondary social studies in 2011, and her Master's in Education in 2012.

“My biggest takeaway from Castleton was how important community is. I feel like a community is the lifeblood of everything,” she said. “This is ingrained in my brain, but more than that, the impact of this has always and will always ooze from my time at Castleton.”

Chase finished his Bachelor's in History the same year, and the two married in 2013 at the top of Mount Mansfield. Marie began teaching for Fair Haven Union High School, while Chase enlisted in the military, heading off to basic training that October.

The couple left their close circle of friends and family in Vermont in 2014 for Savannah, Georgia. Marie found work as a teacher, then as an administrator for a statewide charter school for at-risk youth that partnered with the National Guard. While in Savannah, Marzela, their daughter, whom the pair affectionally call their “Georgia Peach,” was born.

In 2016 Chase was commissioned into the Army and became a 2nd Lieutenant. With that came a move to Columbus, Georgia. Marie took a position as the administrator for a virtual high school serving over 1,000 students across the state. She also went back to school to earn a graduate certificate in Educational Leadership to become a licensed K-12 principal.

"It was an awesome job that allowed me to work from home and hone the skills that would become important to me later in my career,” she explained.

Chase’s service in the Army brought their family to Fairbanks, Alaska in June of 2018. Chase began his leadership career as a platoon leader at Fort Wainwright. Marie started working as an alternative educator for the district’s long-term suspension and expulsion program. She also subbed as a district principal before landing her current job in July 2020 for the Fairbanks North Star Borough School District as the eLearning and Instructional Technology Curriculum Coordinator.

"It has been a whirlwind, but I wouldn’t change a thing,” Marie said of her professional journey and traveling family dynamic. “I have grown so much and I feel such a love for all the great work the people I am proud to call my colleagues have accomplished."

For the Laukhuf family, July of 2020 was not only eventful because of Marie’s new job, but also because Chase returned home after serving for nearly a year in the Middle East. The duo feels that their conscious investment in the people around them has helped them navigate these past few years.

Chase now works as the US Army Alaska COVID Public Health Liaison, assisting all battalions in the brigade with COVID-19 response measures. He will maintain this role until he attends a scheduled career leadership school in 2021, which will advance him to a company commander.

"My biggest piece of advice, especially now more than ever, is to get involved,” shared Marie. “Whether you connect virtually or you can find a way to safely get involved in person, find a group of people to connect with.”