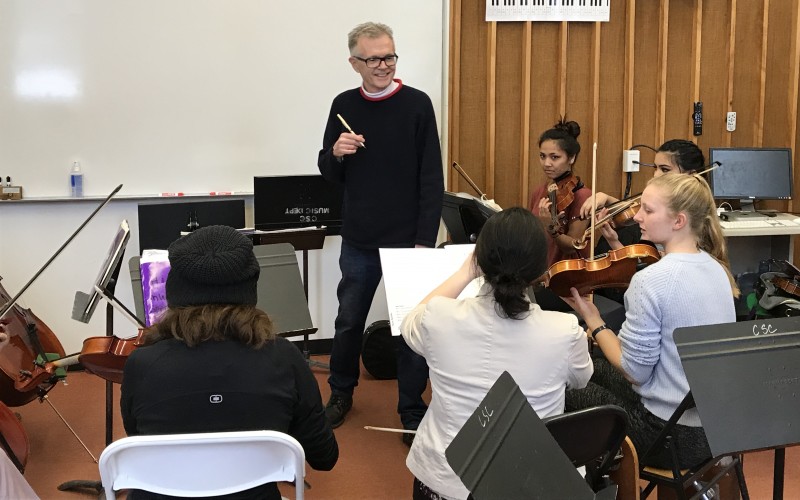 The 2018 Spring semester brought to fruition the Castleton String Ensemble led by local musician and part-time faculty member Peter Miller. Allowing string musicians an opportunity to gain performance experience in a variety of styles, the ensemble includes more than a dozen members and adds to the Castleton Music Departments continuously growing list of collaborative offerings.

“This fall, when I sent out the email to encourage students to sign up for ensembles, I received three separate emails from string players who wanted to play and had friends who wanted to play,” said Professor and Music Department Chair Sherrill Blodgett, adding that creating a string ensemble had been a long-time department goal. “I spoke with Peter Miller, who I knew was also interested in starting a program, and we jumped on the opportunity to begin the ensemble and offer credit to students to participate.” 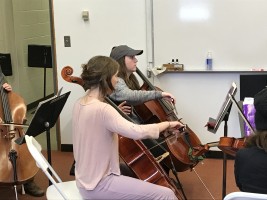 Through the program, which is made up of students and faculty from Castleton, Rutland High School, and Green Mountain College, members have the opportunity to create, recruit, rehearse and perform their own music, while also earning college credits.

Ensemble Director Peter Miller has been teaching applied string lessons, as well as string methods, at Castleton for several years. Before joining the Castleton team, Miller retired from serving as the Fine Arts Supervisor and Orchestra Director for the Rutland Public Schools in 2016.

“At this point in life, it is exciting to be able to share what expertise I have gleaned in life with college-age musicians,” said Miller. “I initially anticipated perhaps five or so musicians. I am really pleased that we actually have a healthy string orchestra with more than triple that number and some really strong musical leaders.”

To date, the ensemble has been practicing works ranging from film scores and Broadway musicals to classical and Baroque pieces. The group is scheduled to make their performance debut on April 18 at 7 p.m. in the Casella Theater.

“This group is diverse, and we have a good time making music,” said Miller. “I think the String Ensemble is a viable organization that will continue to develop.”