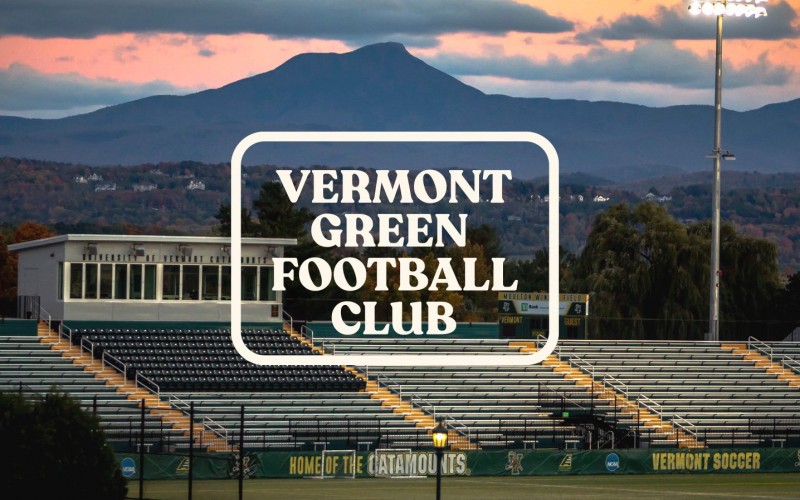 A newly-formed men’s soccer club based in Burlington, Vermont, announced on October 12 that they will be kicking off their inaugural season in May 2022, competing in the USL League Two.

The club will fill a gap in the Vermont soccer landscape by providing a venue for pre-professional players to hone their skills and train at the highest level while retaining collegiate eligibility. The league plays a vital role in the United States and Canada as it provides an elite platform for those pursuing professional careers domestically and internationally.

Co-founded by alumnus Patrick Infurna ’14, who studied Global Studies, the club has bold plans to center environmental responsibility in every aspect of their operations. The club has several initiatives in place to advance its mission and support community engagement including joining 1% for the Planet, a Vermont-based organization whose members contribute a minimum of one percent of their annual sales to environmental causes.

Apparel for the club is locally designed and sourced mindfully with a focus on working with sustainable materials and partners that align with the mission of the club. A portion of the proceeds from the club’s merchandise pre-sale is being donated to the Vermont Natural Resources Council.

Other initiatives include collaborating with local mission-aligned organizations on community and philanthropic endeavors as well as achieving net-zero emissions across all business operations and team, staff and fan travel by the end of the first season.

The club hopes to tap into the existing passion of the soccer community in Vermont and leverage it to create positive impacts on the environment.

“In so many places around the world, soccer clubs serve as a medium for community building and organizing. We're eager to work directly with Vermonters that want to build a strong supporter culture that reflects the values of our communities,” Infurna said.

The club will host home matches at The University of Vermont’s Virtue Field. Information regarding season ticket membership packages will be available at a later date on the club’s website.