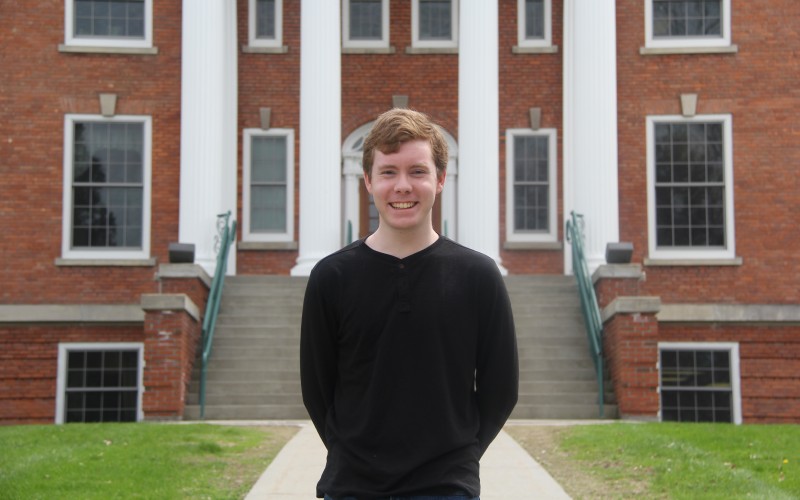 Perry Ragouzis, a Political Science major from Fort Collins, Colorado, has been appointed to an important position within the Vermont State Colleges System ecosystem. After completing an intensive application and interview process, Ragouzis was named the student trustee for the VSCS Board of Trustees.

Members of the Castleton community may know Ragouzis for the work he has done to organize food drives to benefit students who face food insecurity during breaks in the academic year, or from his role on various committees, or maybe they’ve seen him in class or working a shift in the box office of the Fine Arts Center.

The choice to apply for the position was rooted in a belief that what helps to create successful graduates is having a rich and engaging student experience.

“I want to really shed a light on just how important the student experience is, and how having a student body that leaves well-adjusted to the real world is incredibly important, and it's something that should be continually at the forefront of the board of trustees thinking,” he said.

The Board of Trustees provides leadership and governance at the system level, addressing issues of funding, sustainability, accessibility, affordability, and student retention and completion. The student trustee is one of 15 trustees that make up the board. Of the members, five trustees are appointed by the Governor of Vermont who serve a four-year term, four are state legislators who are elected by the Vermont Legislature serving a four-year term, four are board-appointed to a four-year term, as well as a position for the governor. The student trustee, who is elected by the VSCS Student Government Association, serves a one-year term but may be re-elected for a second term. As the student representative, Ragouzis is a voting member.

”I hope to use this position to amplify the good on all of the campuses and to promote a more equitable and just environment through which students are then able to grow, and learn, and enter the world as educated members of our citizenry,” he said.

Ragouzis believes that the heart of the position is to act as a conduit for bringing the lived student experience to the attention of the board of trustees, as well as creating a tangible impact for students on their respective campuses.

“I am very excited and humbled to be asked to step into this position. To be a trustee on the VSCS board of trustees is obviously an incredible honor, especially when we're in such a tumultuous time with the transformation. It is important for students to see stability and leadership. And I hope that I can be something that adds to that stability,” he said.