President Wolk Announces 16th Year at Castleton will be his Last 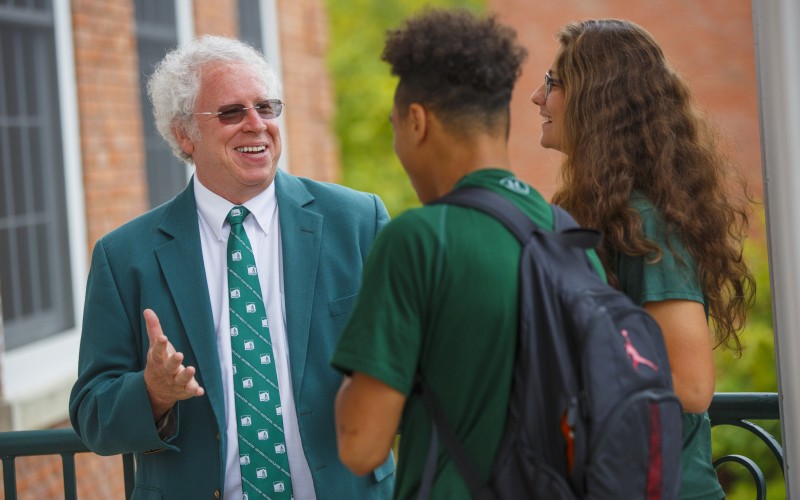 Castleton University President Dave Wolk announced at a campus assembly Wednesday that he will step down in December after serving for 16 years as president. Wolk came to the presidency in December of 2001 after intertwined careers in education and government, and 2017 marks his 43rd year in public service. Wolk is the longest serving president in Castleton history by more than four years.

“I have been blessed, more than I deserve, to have had so many leadership opportunities over the last 43 years, and I am especially grateful for the last 16 at Castleton. Moving on at the end of 2017 will indeed be emotionally challenging because I absolutely love our students and staff, I am lucky to be part of this exceptional community, and I bleed green, full of Spartan Pride. I will be a Spartan always and forever.”

Beginning in 2018, Wolk will begin a new startup venture, Wolk Leadership Solutions, with his wife, Lyn. The Wolks will work with CEOs and Boards of Directors in business, government, industry, schools, hospitals, universities and an array of nonprofits to find solutions to leadership challenges. The new entrepreneurial venture will specialize in coaching leaders to achieve greater success, while offering mediation and conflict resolution services.

“Our goal will be to help leaders to be more successful. We will help boards and leaders to find solutions to their challenges, and to do so in a way that will be effective and enduring over time through coaching and guiding change. I am also hoping to do some teaching and writing, including involvement in a Vermont leadership institute. Helping people to be better at what they do has always been a passion.”

During Wolk’s tenure the university invested nearly $100 million in infrastructure improvements, expanded academic offerings at both the undergraduate and graduate levels, and expanded co-curricular activities, which has transformed what was once considered a “suitcase campus” into a model for vibrancy and engagement across the state and region.

“Castleton has never been in better shape, thanks to President Wolk’s visionary and passionate leadership,” said VSC Chancellor Jeb Spaulding. “People who visit the campus for the first time in a while are amazed at the transformation that has taken place during his tenure. It will be impossible to replace Dave and we will miss him greatly, but he will leave Castleton with a very strong foundation for success into the future.”

Since 2001 Castleton has increased its enrollment by more than 75 percent, more than doubled its athletic offerings, built or renovated every building on campus, and expanded into nearby Rutland to offer students better connections with area businesses, schools, hospitals, and non-profits in an effort to enhance the Castleton student experience. Recently, the university has taken over operations of the Rutland Economic Development Corporation, a partnership unlike any other in the country, which has deepened the university’s commitment to being an economic and intellectual driver in the community while creating strong outcomes for its students.

In 2009 Wolk ushered in the Castleton Student Initiative, a $25.7 million project which reinvigorated student life and learning and changed the face of campus. The largest investment in the history of Castleton, and the Vermont State Colleges, it included improvements and additions to nearly every aspect of student life including athletics, the campus center, and the arts. The crown jewel of the project, Spartan Stadium, is one of the finest multi-use facilities in New England and has been central to the growth of Castleton’s athletic programs, as well as providing a venue to grow Castleton’s reach throughout the state and beyond.

Currently nearing the midpoint of the university’s second ten-year plan, the Castleton Plan, Wolk has most recently overseen additions in graduate education, enrollment increases, a greater presence in Rutland, and a focus on increasing international recruitment. All of these changes culminated in what proved to be one of the most historic days in the institution’s storied 230 year history when on July 23, 2015 the VSC Board of Trustees unanimously voted to modernize the name to “Castleton University.” At the time, Wolk said the name was both aspirational and inspirational, as the community set forth to achieve the goals of the Castleton Plan.

“Dave’s leadership, not just at Castleton but also among the VSC Council of Presidents and Board of Trustees, will be greatly missed,” said VSC Board Chair Martha O’Connor. “He leads with his heart, cares deeply about the state and its students, and has positioned Castleton well for far reaching success now and in the future which will benefit our state for years to come. The board, and I personally, cannot thank him enough for his private candor, public support, and meaningful friendship.”

Wolk was born and grew up in Rutland. He graduated from Rutland High School and then Middlebury College with a degree in political science. He earned a master's degree in educational administration and planning at UVM and a certificate of advanced graduate study at Harvard University. During his professional career he has served as a school principal, superintendent, Vermont’s Commissioner of Education, Vermont State Senator, and on more than 40 boards and commissions, chairing several of them. He plans to continue his life of public service in a variety of ways going forward.