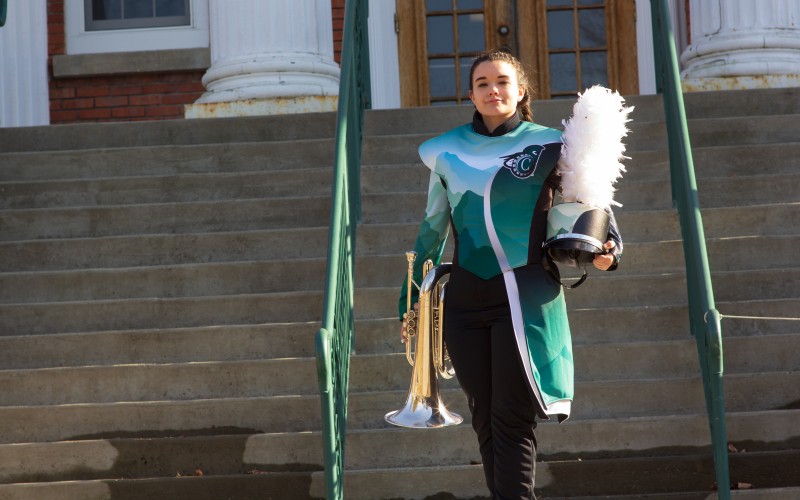 The Castleton Spartan Athletic Bands will be sporting a new look next academic year, as they seek to transform their visual appearance.

Inspired by their rural Vermont surroundings, the innovative new uniform design will feature imaging of the Green Mountains stretching across the front, paired with the Castleton Athletics logo which will sit in the upper left-hand corner of each member’s vests.

“The Athletic Band is growing and our uniforms are wearing out,” explained Coordinator Stephen Klepner. “We believe the new design is fun to look at and represents Castleton extremely well.”

The new uniforms consist of three primary pieces. Along with new shakos, the bottom half of the uniform features spandex bibber pants, while the tops include a vest outer shell and spandex printed shirt that allows members to move comfortably while performing. The uniform’s undershirts will also be interchangeable to fit various halftime show themes, parades, and other events.

To help offset expenses, the Spartan Athletic Bands are looking to raise $10,000 through fundraising efforts to help cover the initial cost of the 70 new uniforms. The updated style will set out to replace the 11-year-old outfits that band members currently utilize. 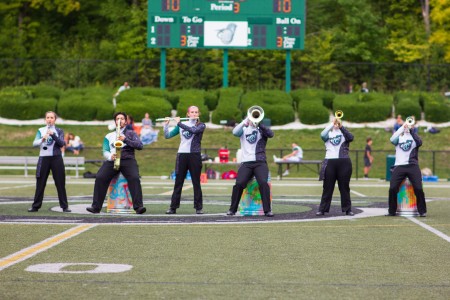 The Spartan Athletic Bands have been entertaining crowds at Castleton Athletic events and around the Rutland area since 2009. They have made over 40 performances and appearances at home football and hockey games, in the Rutland Halloween and Loyalty Day parades, and have toured throughout New England for major competitions.

The four ensembles that make up the Athletic Bands include the Spartan Marching Band, Spartan Spirit Band, Spartan Color Guard, and Spartan Drumline. Aside from home athletic competitions and community events, they are seen performing at open houses, registration days and other Castleton events. Their members vary in musical background, with 40 percent of individuals having never participated in an ensemble, and their goal is to make a positive and energetic impact on the local community.

“The Athletic Bands' mission statement is simply to bring joy through art,” Klepner said. “It is a lifelong teaching lesson to our members that they have the power to influence the world around them through positivity.”