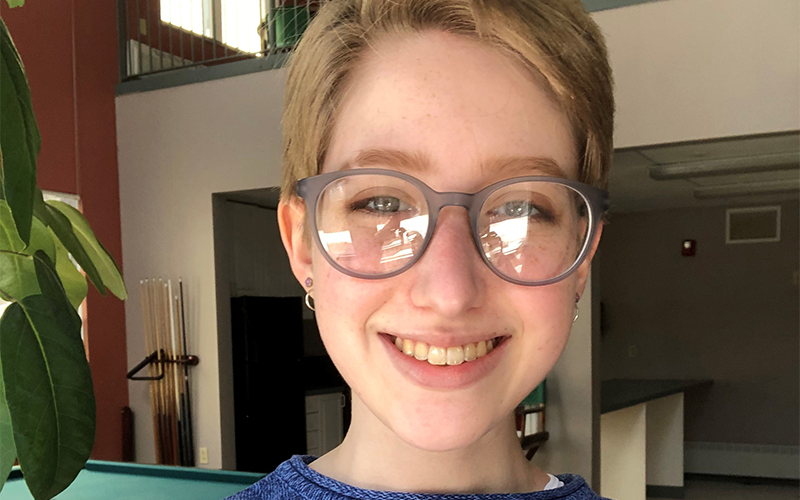 When sophomore Josie Gawrys arrived at Castleton University, she knew she wanted to turn her passion for theater – particularly the behind-the-scenes work that goes into a successful production – into a career. But in her first weeks on campus, she overheard her student orientation staff leader encouraging other students to learn more about The Spartan, Castleton’s student-run newspaper.

“At that point, I wasn’t sure if I was going to be interested in it, but I sort of saw it as a way to branch out and make friends because the one thing that they tell you when you’re first coming in for your first year, for your first semester, is ‘get yourself out there … try a bunch of things …. get involved,’” Josie said. “I took that to heart. At the beginning, it was just going to Spartan meetings and helping to edit the print version on weekends, but then I got more into writing, and I realized that I really enjoyed it.”

Josie now spends her days in both the Fine Arts Center and Leavenworth Hall, double majoring in Technical Theater and Design and Media and Communication.

“I chose Castleton for its theater department. All of the professors are very kind and very understanding, and genuinely care about their students and wanting to see them grow,” she said. “I can say as a sophomore I’ve had opportunities to stage-manage shows. I can say, going out into the world after college, that I’ve already stage-managed a handful of shows. Our professors are making sure that we’re prepared for a career in what we’re studying.”

As a Media & Communication major, Josie’s byline has appeared in a number of local and statewide publications, including VT Digger as part of The Underground Workshop, a network of students and teachers from across the state collaborating to publish student-journalists work.

“My favorite story for other publications is a story that I just wrote, actually, for the Brandon Reporter. I wrote about the Rutland, Vermont, farmers market … I’m interested in farmers markets, and I really like the community aspect of them. All the farmers I talked to there were very passionate about feeding people and community values, and that’s something that resonates with me as well,” she said.

Josie is still writing for The Spartan and has served as the publication’s online editor.

“Last semester, I was living back home in Hershey, Pennsylvania, at the time, and I wanted to write about what it’s like being in a tourist town during a pandemic. So, I interviewed some people that I knew that worked in different areas throughout the town, snapped some photos of different tourist locations,” she said. “I was really proud of how that story turned out.”

Studies show that women like Josie continue to outnumber men in journalism programs at colleges and universities. Despite representing the majority of students in the classroom, that number hasn’t translated to the newsroom. This, Josie thinks, will change in the coming years.

“The step that has to be taken to make newsrooms more diverse is for news organizations to hire more diverse staff. And I do think about this a lot, because, in college, I think about how my fellow classmates are, both in journalism and technical theater … it’s a male-dominated field. But I happen to know a lot more girls studying stage management and girls studying journalism that I can think of than men, so I wonder if there’s this wave coming where there’s going to be a lot more females getting representation in these fields, and I hope that that’s the case,” she said.

After Castleton, Josie hopes to be able to find a career that combines her love for theater and journalism.

“What I’m hoping to do is some combination of journalism and theater. Theater was why I originally came to Castleton; I added my journalism major on later. I’m hoping that I can do freelance journalism, or journalism somewhere specific and do theater on the side. Maybe someday I can work with touring shows and journalism might take a backburner for a little while,” she said. “I’m definitely invested in making both a priority during my lifetime. I’m hoping that I don’t have to choose one or the other because I’m very passionate about both.”