The McNair Scholarship Program has contributed to the success of our undergraduate students by promoting persistence, academic progress, and future studies in graduate programs. Here are to examples of recent students who benefitted from the program.

Tyler-Joseph Ballard is a guy with a lot on his mind – politics, research, doctoral programs, and civil discourse in our community to name a few. 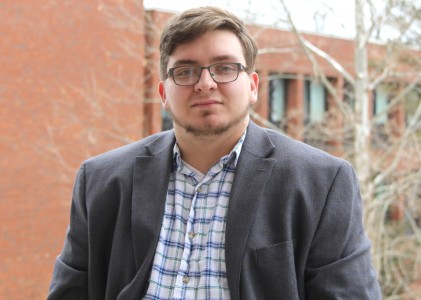 The senior Political Science major from Poultney, Vermont, has lofty goals that his Castleton education is helping him prepare for. With his sights set on a Ph.D. program and eventually law school, the McNair Scholar and vice president of the Pre-Law Club is finding the tools he needs to succeed.

Tyler is also gaining practical experience as he nears graduation through both work and internship. He is working in the Castleton Zoning Administrator's Office, helping to file permits and doing data entry, and also doing an internship with Republican gubernatorial candidate John Klar.

He recently worked on arranging for Klar to speak on campus. He said the event served as an excellent opportunity for Klar to talk to students. Politics and civil discourse are topics that excite Tyler's mind.

"Civil and respectful discourse is something that is lacking in our society," Tyler said. "Whether we blame social media or national politics, I guess the two go hand in hand. There are a plethora of reasons why we must recognize other ideas and engage in political conversation."

Tyler originally planned to go to law school following his undergraduate work. However, the McNair Scholars Program has opened up some new doors and possibilities.

"Over time, I got lost in the research process. I love the research and meeting with students who have the same background and challenges that I have faced. It is inspiring for me to have these opportunities," Tyler said.

Tyler said that the further he got into the program, the more invested in obtaining a doctorate in either political psychology or American politics he became.

"Without McNair, I wouldn't have ended up with the opportunities I have now. I found new enjoyment in doing political research on voting behavior, political psychology, and the political system," Tyler said.

None of this is to say that law school is off the table. He hopes that he might move on to that after he completes a Ph.D. He said the McNair Scholars Program has had one of the most significant impacts on his life.

"This has helped me to feel more confident in myself as a student," Tyler said. "McNair really changed my outlook on my future. I've changed my path, and I think I'm going to be happier with this path. It's a good, small, and creative community. I am truly grateful for the opportunity."

Tyler is finding success at Castleton because he values a close-knit community and the individualized attention he can get from professors. He cited Dr. Rich Clark, professor and Political Science program coordinator, as an example of a professor that gives students the attention they need to thrive.

"This smaller institution provides opportunities that you would see at a larger university. We have access to the same information and resources. We have the only McNair Program in Vermont. We have the means of doing well by our students, faculty, and community," he said. "I think something you don't get at a larger school is that feeling of family, community, and cohesiveness."

Tyler said he would like to stay in the Northeast after graduation. He is currently applying to graduate schools for doctoral study and has offers to attend Ohio State, Brown, SUNY Buffalo, Penn State, and University of Georgia.

"I ended up at Castleton for a reason, and it was the best set of circumstances that could have happened to me," Tyler said.

You could say that Bethany Alvarez is thankful for the McNair Scholars Program. In fact, it saved her undergraduate life, as she puts it.“McNair gave me direction, encouraged me to push myself to my academic limits, and empowered me. I was given full liberty to research whatever topic interested me,” Bethany said. 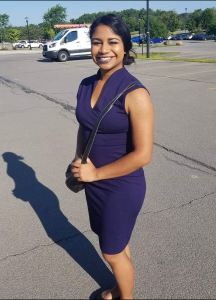 Bethany is a senior Health Science major from Tiverton, RI. She has been involved in a variety of campus clubs and activities, including serving as president of the Humane Society Club and Vice President of Academics for Student Government. She also helped to start the “brainpower” healthy snacks provided by TRIO. On top of all of this, she works full-time as a medical scribe at Rutland Regional Medical Center.

Bethany is also a talented and self-taught artist. She sold pet portraits and dedicated a large portion of those funds toward helping the Rutland County Humane Society.

The role the McNair Scholars Program has played in her development cannot be overstated. Bethany said Director Amanda Richardson became more than a mentor. She became a friend, colleague, role model, and hero. While facing various challenges throughout college, she considered taking a gap year.

"Amanda stepped in over and over and helped me accomplish the small steps so I could focus on the large ones. Working full time in the Emergency Room at RRMC and attending school full time was taxing. I cannot thank her enough,” Bethany said.

After graduation, Bethany will pursue a Master’s of Public Health in Behavioral, Community, and Social Health at Indiana University at Bloomington.

“My main interest is health disparities and providing more accessible healthcare to our country at large. After completing this, I will likely work for the CDC or WHO for a few years before I move on to obtain an MD and become a family physician,” Bethany said.

Bethany said Dr. Brad Coupe had a tremendous positive impact on her as a student.

“He’s gone above and beyond as an advisor and professor. It’s clear he’s extremely passionate about teaching, and he values honesty, fairness, and hard work,” Bethany said. “His open-door policy reflects how much he loves getting to know his students. He’s down to earth, easy to talk to, upbeat, friendly, funny, empathetic, and still extremely professional. He’s a role model to me, and I hope Castleton recognizes just how great Dr. Coupe is.”

Castleton has helped Bethany reach her goals, and she found that the variety of courses allowed her to hone in on what she liked. Once she found a major, courses like Child and Adolescent Development helped her understand the fundamentals of healthcare and the dire community need for affordable, quality, accessible education.

“Castleton faculty and staff are warm, compassionate, and energetic. They are flexible and willing to help you. They really do want you to succeed and go on to do bigger and better things, and that really reflects the values of the campus. I think that’s a very unique and wonderful thing about Castleton,” Bethany said.

About the McNair Scholars Program