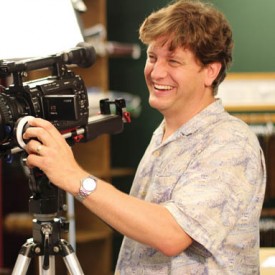 Andrew received his degree at Indiana University in Bloomington, Indiana where he immediately went to work at the local PBS affiliate as a producer, editor, and director for many local productions around the Midwest. In 1992 Andrew produced the "Summer Music Games", a two-hour live program on PBS for the Drum and Bugle Corps broadcast from Dallas, Texas. From there, Andrew moved to Vermont as an editor and effects artist for a film production company. He's worked on over 15 feature films that can be seen around the world and, most impressively, on the Mystery Science Theater 3000 episode of "Time Chasers." In 1998, Andrew started WestView Digital, a video production company doing work for local, regional and national customers including NYU Medical Center, The Toy Industry Foundation, DuPont, AGFA and Bayer Pharmaceuticals. Andrew started teaching part-time at Castleton back when it was still a state college in 2002. Today, he's bringing as much of his real-world experience as he can to the classroom while continuing his work at WestView Digital.