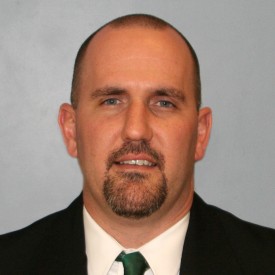 Tony Volpone has been Castleton's Head Football Coach since 2014.

Prior to Castleton, Volpone spent the seven seasons as a member of the Endicott coaching staff, most recently serving as the associate head coach, offensive coordinator and quarterback coach. During his final season with Endicott, the Gulls captured their second consecutive (NEFC) championship with a 24-0 shutout of Salve Regina and earned a trip to the NCAA Tournament. Volpone’s offense was the top scoring in the conference, while also ranking first in total yards, passing yards and passing touchdowns. He had seven offense players earn first-team all-conference honors, including NEFC Offensive Player of the Year and quarterback Drew Frenette.

Volpone went to Endicott with a wealth of football experience, having coached at the collegiate level with NEFC foe Nichols College, Bridgewater College (Va.), Norwich University, and Becker College. Volpone began his coaching career at his alma mater, Nichols College, from 2000-03. While at Nichols, Tony served as the quarterback and running backs coach and was instrumental in guiding the Bison to the ECAC Championship game in 2000 and an NEFC Boyd Division Championship in 2001.

In 2003, Volpone accepted the assistant football and assistant athletic director position at Pine Crest Preparatory School in Ft. Lauderdale, Florida. From Pine Crest, Anthony moved on to Bridgewater, Virginia for the assistant job at Bridgewater College. At BC, Volpone coached the tight end and offensive line positions. With his help, the Eagles captured the Old Dominion Athletic Conference title and a berth in the NCAA playoffs.

Volpone is married to his wife Aida of eight years and has a son, Charlie.