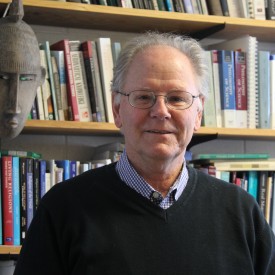 A full time member of the Castleton faculty for over 29 years, Johnson served as a professor of Philosophy, retiring from the University in 2015.

Joining Castleton in 1986, Johnson has been a pillar of the Castleton academic community from the day he arrived. During his time he single-handedly created the Philosophy program, which now includes dozens of courses, a minor, and a Bachelor of Arts degree. Over the decades, he developed a number of interdisciplinary team-taught courses that exemplified the term “integrated learning.” In addition Johnson played a leading role on numerous faculty committees and was named VSC Faculty Fellow in 2005.

Johnson continues to display his devotion to Castleton students by creating the Robert Johnson Fellowship, a $1,000 fellowship bestowed annually on a deserving Philosophy major.