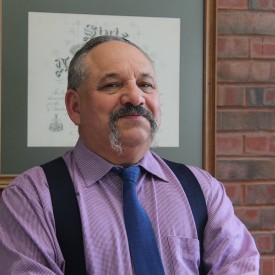 As both an undergraduate and in rabbinic school Doug Weber sought to learn "The Meaning of Life." Doug has discovered that while answers are elusive, we can ask better and better questions and learn to live with uncertainty. Though Doug has not solved the great enigmas, he genuinely enjoys working with students who also seek after The Big, Eternal Questions. Doug primarily makes a living as the Rabbi of the Rutland Jewish Center. Teaching at Castleton University is a very enjoyable Act 2 and hobby for him. Before switching to Philosophy, his original undergraduate major was in tuba performance. Doug continues to play tuba and/or euphonium in various local groups including the College Wind Ensemble and Rutland City Band. He is also an avid curler (the silly looking sport played with brooms.) He skis a great deal, which conclusively demonstrates that practice does not necessarily make perfect. Doug leads the most quotidian of personal lives. Doug and his wife, Jessica, have been married since virtually the Pleistocene Era. They have three adult children, Zach, Taliah, and Eli.

A fun bit of trivia about Doug Weber: He was a childhood friend of radio personality Howard Stern. They spent the summers at the same Jewish summer camp and since they are almost exactly the same age, they were usually in the same cabin.