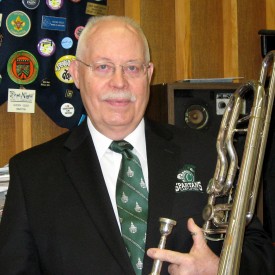 Professor of Music, Glenn Giles has taught in the Rutland area for 42 years, and has directed the Rutland City Band; Proctor Community Chorus; and the Lakes Region Youth Orchestra Junior Winds. Mr. Giles was Fine Arts Supervisor for the Rutland City Schools for 14 years until his retirement in 2007, under his leadership the Rutland Schools were designate one of the “Best 100 Music Education Communities” by the American Music conference in 2002 and were named one of twelve Model Music Programs in the United States by MENC and the National Department of Education in 2006.

Professor Giles has served as the Choir Director at the Union Church of Proctor for the past 40 years, and currently conducts the Lakes Region Youth Orchestra Wind Ensemble. He is also Bass Trombonist in the EnerJazz Big Band. Mr. Giles attended Lowell State College and Eastern Nazarene College in Massachusetts, and received a Bachelor of Science in Music Education degree from Castleton University. He received his Master of Music Degree in instrumental conducting at the University of Maine where he studied conducting with Dennis Cox, Curvin Farnham, Arnald Gabriel, Anthony Maiello, and John Williamson.

Glenn has been a guest conductor/clinician in the three Northern New England States. As an active member of the Vermont Music Educators Association, he has adjudicated for the Vermont All-State Music Festival and Green Mountain District Festival and is a past president of the association. Mr. Giles' other professional organizations and honors fraternities include the National Association for Music Education, International Association of Jazz Educators, National Federation Interscholastic Music Association and Pi Kappa Lambda National Music Honor Society.