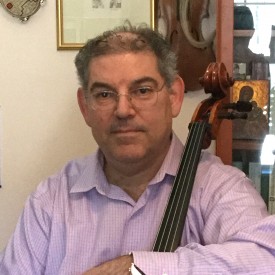 Jared Shapiro holds a BA in Music and Natural Science and an MFA in Cello and Composition from Bennington College. He studied composition with Henry Brant, Vivian Fine, Allen Shawn, and Louis Calabro and improvisation with Milford Graves. His interest in world music has led to ongoing collaborations and performances with musicians from diverse music cultures. In 2014 Jared commissioned Norwegian composer Bjørn Bolstad Skjelbred to write a duo for cello and bayan (Russian button accordion), a project sponsored by the Norwegian Composer’s Fund. He has been a member of the eclectic trio Natural History since 1973, a group that was recently featured in a concert at the Bennington Museum as part of the Music in the Museum concert series. As a recording artist he has appeared on Telarc, Opus One, Worldsoul Records, and Albany Records. He is an active freelancer, an Adjunct at Castleton University, and is on the faculty of Taconic Music’s Strings for Kids, the Manchester and the Mountains Chamber Music Workshop, The Mountain School at Winhall, and maintains a teaching studio in East Dorset, Vermont.