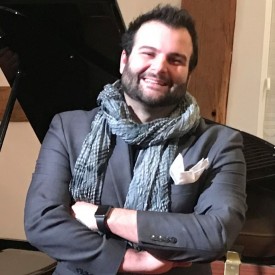 American tenor, Joshua Collier, praised for his “thrilling high range” and “passionate commitment to character,” was hailed as “a great Italian tenor on the make” by Boston’s Classical Scene in his June 2016 role debut as Roméo in Roméo et Juliette.

In addition to the lyric stage, Mr. Collier has performed the tenor solos in much of the symphonic and oratorio repertoire including Requiem by both Verdi and Mozart, Serenade for Tenor, Horn, and Strings (op.31), Rejoice in the Lamb, Abraham and Isaac - All by Benjamin Britten, Elijah and Paulus of Mendelssohn, Handel’s Messiah, as well as Beethoven's 9th Symphony and the Coronation Mass of Mozart.

Throughout his career he has been fortunate to work with such conductors as Stephen Lord, Lidiya Yankovskaya, John Moriarty, Emmanuel Plasson, Andy Anderson, and Michael Sakir, among others. Mr. Collier founded the Bostonian opera company, Opera Brittenica, championing the works of Benjamin Britten, in 2013, and is currently is the Artistic Director of BARN OPERA (www.barnopera.com) based in Brandon, Vermont, and is represented world-wide by Berger Artist Management. For more information, please visit jrctenor.com