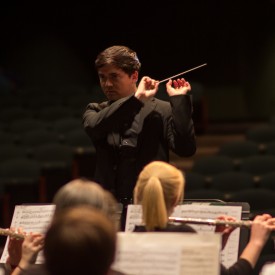 Joshua Thompson conducts the wind ensemble, chamber ensembles, teaches French horn, conducting, and various courses. Also, he is an affiliate artist at the University of Vermont. He was most recently named the music director of the Saratoga Youth Symphony in Saratoga Springs, New York. Joshua holds degrees in music education and French horn performance from the College of Saint Rose and the Hartt School.

He has performed with several ensembles and organizations across the Northeastern United States, they have included: Albany Pro Musica, Battenkill Chorale, Berkshire Symphony Orchestra, Burlington Chamber Orchestra, Hartford Independent Chamber Orchestra, Hubbard Hall Opera Theater, Park Playhouse (Albany, NY), and the Schenectady Symphony Orchestra. He is the 2011 winner of the solo competition at the Northeast Horn Workshop, recorded for Naxos and Johnny Vic records, and guest conducted at festivals across New York and New England.

As an advocate for the arts in our communities, he is the founder and director of Gloversville Community Music. There he maintains a private studio and conducts the Gloversville Wind Symphony, a wind ensemble comprised of musicians from New York and New England. Through GCM, he is the artistic director of the “Chamber Music at the Chamber” concert series, a 2017 and 2018 Saratoga Arts grant awardee.