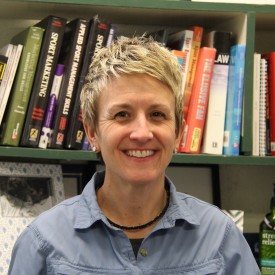 Professor Lennox-Levins began her career in higher education and sport as the Assistant Women's Soccer Coach and the Assistant to Athletic Fiscal Systems at her alma mater, Binghamton University (SUNY) in 1994. After four years of coaching, which ended with an appointment as Interim Head Women’s Soccer coach from 1997-1998, Professor Lennox-Levins moved completely into the athletic administration ranks. During her 11 years professionally at Binghamton she moved steadily up the administrative ladder, assisting in the university's transition from an NCAA Division III program to Division I. From 1998-2003 she served as an Assistant Athletic Director and from 2003-2005 she worked as Associate Athletics Director at Binghamton before moving to Washington D.C. where she served as Director of Athletics at Trinity University. While living in the Washington, D.C. area Professor Lennox-Levins also spent almost three years working for the Human Rights Campaign, including a brief placement in Albuquerque, NM. Most recently, Professor Lennox-Levins served as the Director of Athletics at Green Mountain College (2009-2012), and was a part-time professor at Castleton University during the 2010-2011 academic year.

Professor Lennox-Levins began her career as a full-time faculty member at Castleton in the Fall of 2012.  She was the lead developer on the M.S. in Athletic Leadership program from 2013-2015 and serves as the Program Director for that program as well as for the B.S. in Sport Management.  She also teaches in both programs.  She has presented at numerous conferences on topics such as: Team Building: Alternatives to Hazing in the World of Athletics, Event Management, Risk Management in Sport, and Building Strong Organizational Culture, among others.

Professor Lennox-Levins’s outside interests include running, hiking, golf, coaching youth soccer, boating, and spending time with her family. She has completed five marathons, one Half Ironman Event (70.3), and participated in numerous half marathons and other road and trail races. Lennox-Levins resides in Rutland, VT with her wife Kim and their daughter Lucy.