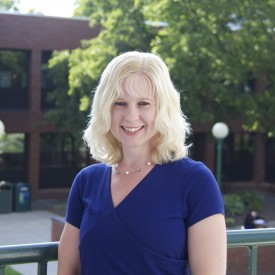 Melissa Paradee has been a member of the Castleton community for many years. She earned her undergraduate degree in psychology and obtained her Vermont state licensure in elementary education and special education while attending Castleton University. After obtaining her Master's degree in education from the College of St. Joseph, she worked primarily in Student Affairs at Huntingdon College in Montgomery, AL. Upon returning to Vermont, she was hired to serve as the Director of Student Activities, a position she held for nearly 12 years.

While working at Castleton, she earned her doctoral degree from the University of Vermont in educational leadership and policy studies. In spring 2013, Dr. Paradee began teaching as an adjunct professor in Castleton's psychology department. She has also taught narrative writing to Castleton's Upward Bound students. Dr. Paradee currently works as the Vice President of Student Affairs/Dean of Students at the College of St. Joseph. She also serves on the board for the Mentor Connector, an organization in Rutland County that connects area youth with mentors.

Dr. Paradee's interests include college student development, educational psychology, and health and wellness. Aside from her academic passions, she enjoys playing tennis, running 5Ks, and working as a part-time group fitness instructor.