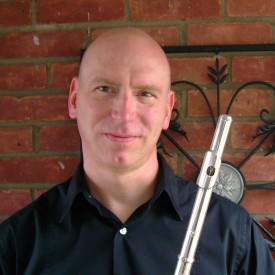 Norman Thibodeau was assistant principal flutist of the Orquesta Sinfónica del Estado de México. He is a member of the chamber group “Musicians of Ma’alwyck.”

He recorded solo flute works of Anthony Holland for Albany Records, and has had both live and recorded performances broadcast on NPR. He has played with almost all the professional orchestras from central New York State through western New England, including the Albany and Berkshire Symphonies and the Glimmerglass Opera Festival. In 2008, he was guest solo artist for the Skidmore College Flute Festival.

He performs on a range of flutes from baroque traverso to modern microtonal instruments, including a contrabass flute. Also a composer, Norman has works published and recorded by ALRY Publications and Albany Records. His teachers include Irvin Gilman, Robert Dick, Stephen Preston, and Britton Johnson. Norman also teaches flute at SUNY Schenectady, Union College, Berkshire Music School, and privately. He taught extended flute techniques at the Wildacres Flute Retreat for several years. Additionally, he is a trained practitioner of the Feldenkrais Method, which he incorporates into his flute pedagogy.