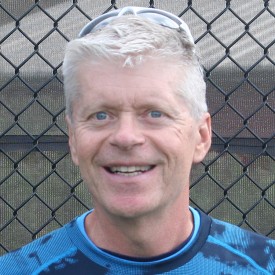 Rob Purdy has been the Head Women's Tennis Coach since 2010.

Purdy is a USPTA certified tennis professional, the Head Tennis Pro at Vermont Sport and Fitness in Rutland, Vermont and has over 30 years of teaching and coaching experience at all levels.

The 1987 graduate of Lyndon State College received his coaching certificate from the Sanchez/Casals tennis academy and has coached many of the area’s top high school players who have gone on to successful collegiate careers, as well as USTA Futures and Challenger Tournaments.

Purdy spent two seasons as Head Coach of the Castleton men’s and women’s tennis teams in the early 1980’s, and was an assistant with the women’s team during the 2008 and 2009 seasons.

He spent 16 seasons at Green Mountain as head coach of the men’s team, and was head coach of the women’s team prior to it being dropped as a varsity sport. Purdy was named NAIA Men’s Coach of the Year in Region 10 four-straight seasons from 2000-2003, winning Mayflower titles from 2001-2003 and advancing to the NAIA National Tournament.

With the women’s team at GMC, Purdy led the Eagles to the NAIA National Tournament in 1999 and earned a Mayflower title in 2002.